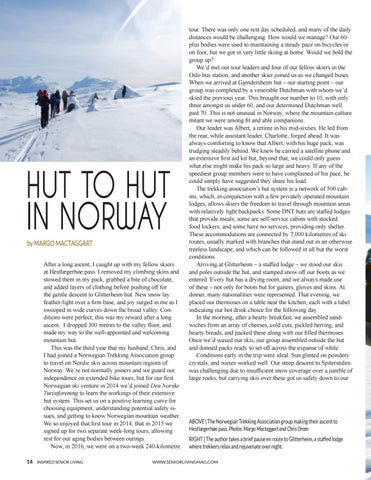 HUT TO HUT IN NORWAY by MARGO MACTAGGART After a long ascent, I caught up with my fellow skiers at Hestlægerhøe pass. I removed my climbing skins and stowed them in my pack, grabbed a bite of chocolate, and added layers of clothing before pushing off for the gentle descent to Glitterheim hut. New snow lay feather-light over a firm base, and joy surged in me as I swooped in wide curves down the broad valley. Conditions were perfect; this was my reward after a long ascent. I dropped 300 metres to the valley floor, and made my way to the well-appointed and welcoming mountain hut. This was the third year that my husband, Chris, and I had joined a Norwegian Trekking Association group to travel on Nordic skis across mountain regions of Norway. We’re not normally joiners and we guard our independence on extended bike tours, but for our first Norwegian ski venture in 2014 we’d joined Den Norske Turistforening to learn the workings of their extensive hut system. This set us on a positive learning curve for choosing equipment, understanding potential safety issues, and getting to know Norwegian mountain weather. We so enjoyed that first tour in 2014, that in 2015 we signed up for two separate week-long tours, allowing rest for our aging bodies between outings. Now, in 2016, we were on a two-week 240-kilometre 16 14

tour. There was only one rest day scheduled, and many of the daily distances would be challenging. How would we manage? Our 60plus bodies were used to maintaining a steady pace on bicycles or on foot, but we got in very little skiing at home. Would we hold the group up? We’d met our tour leaders and four of our fellow skiers in the Oslo bus station, and another skier joined us as we changed buses. When we arrived at Gjendersheim hut – our starting point – our group was completed by a venerable Dutchman with whom we’d skied the previous year. This brought our number to 10, with only three amongst us under 60, and our determined Dutchman well past 70. This is not unusual in Norway, where the mountain culture meant we were among fit and able companions. Our leader was Albert, a retiree in his mid-sixties. He led from the rear, while assistant leader, Charlotte, forged ahead. It was always comforting to know that Albert, with his huge pack, was trudging steadily behind. We knew he carried a satellite phone and an extensive first aid kit but, beyond that, we could only guess what else might make his pack so large and heavy. If any of the speediest group members were to have complained of his pace, he could simply have suggested they share his load. The trekking association’s hut system is a network of 500 cabins, which, in conjunction with a few privately operated mountain lodges, allows skiers the freedom to travel through mountain areas with relatively light backpacks. Some DNT huts are staffed lodges that provide meals; some are self-service cabins with stocked food lockers; and some have no-services, providing only shelter. These accommodations are connected by 7,000 kilometres of ski routes, usually marked with branches that stand out in an otherwise treeless landscape, and which can be followed in all but the worst conditions. Arriving at Glitterheim – a staffed lodge – we stood our skis and poles outside the hut, and stamped snow off our boots as we entered. Every hut has a drying room, and we always made use of these – not only for boots but for gaiters, gloves and skins. At dinner, many nationalities were represented. That evening, we placed our thermoses on a table near the kitchen, each with a label indicating our hot drink choice for the following day. In the morning, after a hearty breakfast, we assembled sandwiches from an array of cheeses, cold cuts, pickled herring, and hearty breads, and packed these along with our filled thermoses. Once we’d waxed our skis, our group assembled outside the hut and donned packs ready to set off across the expanse of white. Conditions early in the trip were ideal. Sun glinted on powdery crystals, and waxes worked well. Our steep descent to Spiterstulen was challenging due to insufficient snow coverage over a jumble of large rocks, but carrying skis over these got us safely down to our

ABOVE | The Norwegian Trekking Association group making their ascent to Hestlægerhøe pass. Photos: Margo Mactaggart and Chris Oram RIGHT | The author takes a brief pause en route to Glitterheim, a staffed lodge where trekkers relax and rejuvenate over night.