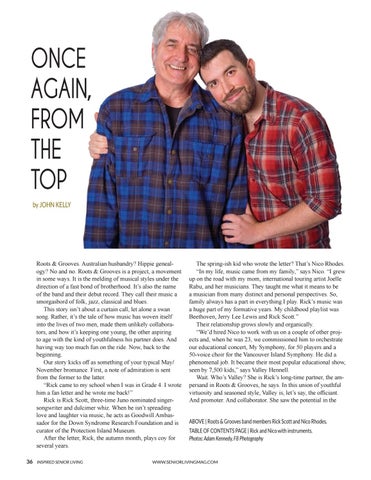 ONCE AGAIN, FROM THE TOP by JOHN KELLY

Roots &amp; Grooves. Australian husbandry? Hippie genealogy? No and no. Roots &amp; Grooves is a project, a movement in some ways. It is the melding of musical styles under the direction of a fast bond of brotherhood. It’s also the name of the band and their debut record. They call their music a smorgasbord of folk, jazz, classical and blues. This story isn’t about a curtain call, let alone a swan song. Rather, it’s the tale of how music has woven itself into the lives of two men, made them unlikely collaborators, and how it’s keeping one young, the other aspiring to age with the kind of youthfulness his partner does. And having way too much fun on the ride. Now, back to the beginning. Our story kicks off as something of your typical May/ November bromance. First, a note of admiration is sent from the former to the latter. “Rick came to my school when I was in Grade 4. I wrote him a fan letter and he wrote me back!” Rick is Rick Scott, three-time Juno nominated singersongwriter and dulcimer whiz. When he isn’t spreading love and laughter via music, he acts as Goodwill Ambassador for the Down Syndrome Research Foundation and is curator of the Protection Island Museum. After the letter, Rick, the autumn month, plays coy for several years. 38 36

The spring-ish kid who wrote the letter? That’s Nico Rhodes. “In my life, music came from my family,” says Nico. “I grew up on the road with my mom, international touring artist Joelle Rabu, and her musicians. They taught me what it means to be a musician from many distinct and personal perspectives. So, family always has a part in everything I play. Rick’s music was a huge part of my formative years. My childhood playlist was Beethoven, Jerry Lee Lewis and Rick Scott.” Their relationship grows slowly and organically. “We’d hired Nico to work with us on a couple of other projects and, when he was 23, we commissioned him to orchestrate our educational concert, My Symphony, for 50 players and a 50-voice choir for the Vancouver Island Symphony. He did a phenomenal job. It became their most popular educational show, seen by 7,500 kids,” says Valley Hennell. Wait. Who’s Valley? She is Rick’s long-time partner, the ampersand in Roots &amp; Grooves, he says. In this union of youthful virtuosity and seasoned style, Valley is, let’s say, the officiant. And promoter. And collaborator. She saw the potential in the ABOVE | Roots &amp; Grooves band members Rick Scott and Nico Rhodes. TABLE OF CONTENTS PAGE | Rick and Nico with instruments. Photos: Adam Kennedy, F8 Photography 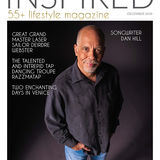