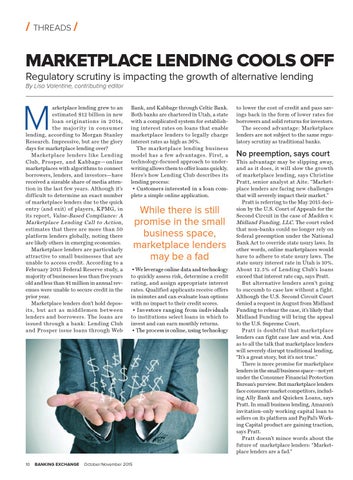 arketplace lending grew to an estimated $12 billion in new loan orig inations in 2014, the major it y in consumer lending, according to Morgan Stanley Research. Impressive, but are the glory days for marketplace lending over? Marketplace lenders like Lending Club, Prosper, and Kabbage—online marketplaces with algorithms to connect borrowers, lenders, and investors—have received a sizeable share of media attention in the last few years. Although it’s difficult to determine an exact number of marketplace lenders due to the quick entry (and exit) of players, KPMG, in its report, Value-Based Compliance: A Marketplace Lending Call to Action , estimates that there are more than 50 platform lenders globally, noting there are likely others in emerging economies. Marketplace lenders are particularly attractive to small businesses that are unable to access credit. According to a February 2015 Federal Reserve study, a majority of businesses less than five years old and less than $1 million in annual revenues were unable to secure credit in the prior year. Marketplace lenders don’t hold deposit s, but a c t a s m idd lemen bet ween lenders and borrowers. The loans are issued through a bank: Lending Club and Prosper issue loans through Web

Bank, and Kabbage through Celtic Bank. Both banks are chartered in Utah, a state with a complicated system for establishing interest rates on loans that enable marketplace lenders to legally charge interest rates as high as 36%. The marketplace lending business model has a few advantages. First, a technology-focused approach to underwriting allows them to offer loans quickly. Here’s how Lending Club describes its lending process: • Customers interested in a loan complete a simple online application.

While there is still promise in the small business space, marketplace lenders may be a fad • We leverage online data and technology to quickly assess risk, determine a credit rating, and assign appropriate interest rates. Qualified applicants receive offers in minutes and can evaluate loan options with no impact to their credit scores. • Investors ranging from individuals to institutions select loans in which to invest and can earn monthly returns. • The process is online, using technology

to lower the cost of credit and pass savings back in the form of lower rates for borrowers and solid returns for investors. The second advantage: Marketplace lenders are not subject to the same regulatory scrutiny as traditional banks.

No preemption, says court This advantage may be slipping away, and as it does, it will slow the growth of marketplace lending, says Christine Pratt, senior analyst at Aite. “Marketplace lenders are facing new challenges that will severely impact their market.” Pratt is referring to the May 2015 decision by the U.S. Court of Appeals for the Second Circuit in the case of Madden v. Midland Funding, LLC. The court ruled that non-banks could no longer rely on federal preemption under the National Bank Act to override state usury laws. In other words, online marketplaces would have to adhere to state usury laws. The state usury interest rate in Utah is 10%. About 12.5% of Lending Club’s loans exceed that interest rate cap, says Pratt. But alternative lenders aren’t going to succumb to case law without a fight. Although the U.S. Second Circuit Court denied a request in August from Midland Funding to rehear the case, it’s likely that Midland Funding will bring the appeal to the U.S. Supreme Court. Pratt is doubtful that marketplace lenders can fight case law and win. And as to all the talk that marketplace lenders will severely disrupt traditional lending, “It’s a great story, but it’s not true.” There is more promise for marketplace lenders in the small business space—not yet under the Consumer Financial Protection Bureau’s purview. But marketplace lenders face consumer market competitors, including Ally Bank and Quicken Loans, says Pratt. In small business lending, Amazon’s invitation-only working capital loan to sellers on its platform and PayPal’s Working Capital product are gaining traction, says Pratt. Pratt doesn’t mince words about the future of marketplace lenders: “Marketplace lenders are a fad.”