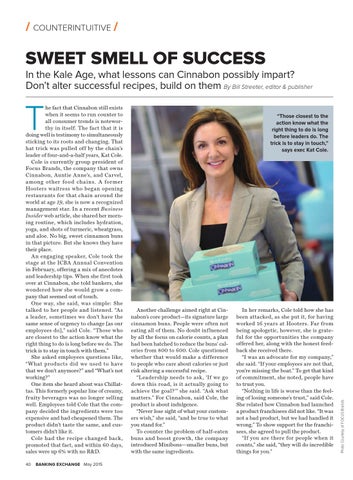 In the Kale Age, what lessons can Cinnabon possibly impart? Don’t alter successful recipes, build on them By Bill Streeter, editor & publisher

“Those closest to the action know what the right thing to do is long before leaders do. The trick is to stay in touch,” says exec Kat Cole.

Another challenge aimed right at Cinnabon’s core product—its signature large cinnamon buns. People were often not eating all of them. No doubt inf luenced by all the focus on calorie counts, a plan had been hatched to reduce the buns’ calories from 800 to 600. Cole questioned whether that would make a difference to people who care about calories or just risk altering a successful recipe. “Leadership needs to ask, ‘If we go down this road, is it actually going to achieve the goal?’” she said. “Ask what matters.” For Cinnabon, said Cole, the product is about indulgence. “Never lose sight of what your customers wish,” she said, “and be true to what you stand for.” To counter the problem of half-eaten buns and boost growth, the company introduced Minibons—smaller buns, but with the same ingredients.

In her remarks, Cole told how she has been attacked, as she put it, for having worked 16 years at Hooters. Far from being apologetic, however, she is grateful for the opportunities the company offered her, along with the honest feedback she received there. “I was an advocate for my company,” she said. “If your employees are not that, you’re missing the boat.” To get that kind of commitment, she noted, people have to trust you. “Nothing in life is worse than the feeling of losing someone’s trust,” said Cole. She related how Cinnabon had launched a product franchisees did not like. “It was not a bad product, but we had handled it wrong.” To show support for the franchisees, she agreed to pull the product. “If you are there for people when it counts,” she said, “they will do incredible things for you.”

he fact that Cinnabon still exists when it seems to run counter to all consumer trends is noteworthy in itself. The fact that it is doing well is testimony to simultaneously sticking to its roots and changing. That hat trick was pulled off by the chain’s leader of four-and-a-half years, Kat Cole. Cole is currently group president of Focus Brands, the company that owns Cinnabon, Auntie Anne’s, and Carvel, among other food chains. A for mer Hooters waitress who began opening restaurants for that chain around the world at age 19, she is now a recognized management star. In a recent Business Insider web article, she shared her morning routine, which includes hydration, yoga, and shots of turmeric, wheatgrass, and aloe. No big, sweet cinnamon buns in that picture. But she knows they have their place. An engaging speaker, Cole took the stage at the ICBA Annual Convention in February, offering a mix of anecdotes and leadership tips. When she first took over at Cinnabon, she told bankers, she wondered how she would grow a company that seemed out of touch. One way, she said, was simple: She talked to her people and listened. “As a leader, sometimes we don’t have the same sense of urgency to change [as our employees do],” said Cole. “Those who are closest to the action know what the right thing to do is long before we do. The trick is to stay in touch with them.” She asked employees questions like, “What products did we used to have that we don’t anymore?” and “What’s not working?” One item she heard about was Chillattas. This formerly popular line of creamy, fruity beverages was no longer selling well. Employees told Cole that the company decided the ingredients were too expensive and had cheapened them. The product didn’t taste the same, and customers didn’t like it. Cole had the recipe changed back, promoted that fact, and within 60 days, sales were up 6% with no R&D.