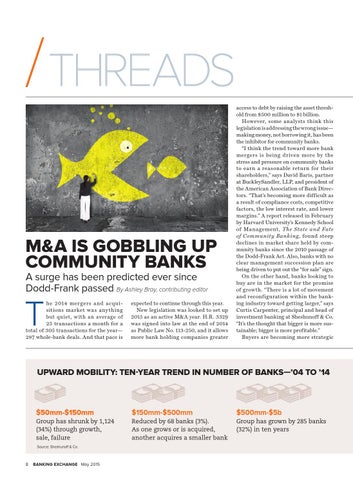 / THREADS M&amp;A is gobbling up community banks A surge has been predicted ever since Dodd-Frank passed By Ashley Bray, contributing editor

he 2014 mergers and acquisitions market was any thing but quiet, with an average of 25 transactions a month for a total of 305 transactions for the year— 287 whole-bank deals. And that pace is

expected to continue through this year. New legislation was looked to set up 2015 as an active M&amp;A year. H.R. 3329 was signed into law at the end of 2014 as Public Law No. 113-250, and it allows more bank holding companies greater

access to debt by raising the asset threshold from $500 million to $1 billion. However, some analysts think this legislation is addressing the wrong issue— making money, not borrowing it, has been the inhibitor for community banks. “I think the trend toward more bank mergers is being driven more by the stress and pressure on community banks to earn a reasonable return for their shareholders,” says David Baris, partner at BuckleySandler, LLP, and president of the American Association of Bank Directors. “That’s becoming more difficult as a result of compliance costs, competitive factors, the low interest rate, and lower margins.” A report released in February by Harvard University’s Kennedy School of Management, The State and Fate of Community Banking, found steep declines in market share held by community banks since the 2010 passage of the Dodd-Frank Act. Also, banks with no clear management succession plan are being driven to put out the “for sale” sign. On the other hand, banks looking to buy are in the market for the promise of growth. “There is a lot of movement and reconfiguration within the banking industry toward getting larger,” says Curtis Carpenter, principal and head of investment banking at Sheshunoff &amp; Co. “It’s the thought that bigger is more sustainable; bigger is more profitable.” Buyers are becoming more strategic

Upward mobility: TEN-year trend in number of banks—’04 to ’14

Reduced by 68 banks (3%). As one grows or is acquired, another acquires a smaller bank 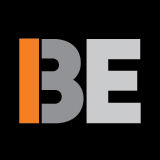