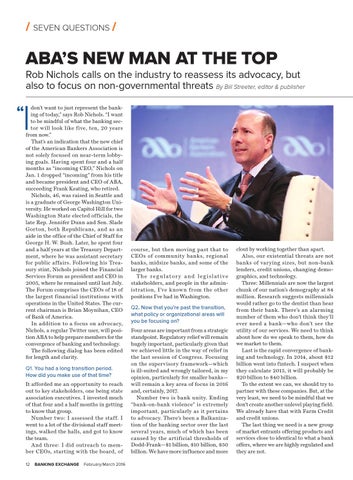 ABA’s new man at the top

Rob Nichols calls on the industry to reassess its advocacy, but also to focus on non-governmental threats By Bill Streeter, editor & publisher

don’t want to just represent the banking of today,” says Rob Nichols. “I want to be mindful of what the banking sector will look like five, ten, 20 years from now.” That’s an indication that the new chief of the American Bankers Association is not solely focused on near-term lobbying goals. Having spent four and a half months as “incoming CEO,” Nichols on Jan. 1 dropped “incoming” from his title and became president and CEO of ABA, succeeding Frank Keating, who retired. Nichols, 46, was raised in Seattle and is a graduate of George Washington University. He worked on Capitol Hill for two Washington State elected officials, the late Rep. Jennifer Dunn and Sen. Slade Gorton, both Republicans, and as an aide in the office of the Chief of Staff for George H. W. Bush. Later, he spent four and a half years at the Treasury Department, where he was assistant secretary for public affairs. Following his Treasury stint, Nichols joined the Financial Services Forum as president and CEO in 2005, where he remained until last July. The Forum comprises the CEOs of 18 of the largest financial institutions with operations in the United States. The current chairman is Brian Moynihan, CEO of Bank of America. In addition to a focus on advocacy, Nichols, a regular Twitter user, will position ABA to help prepare members for the convergence of banking and technology. The following dialog has been edited for length and clarity. Q1. You had a long transition period. How did you make use of that time? It afforded me an opportunity to reach out to key stakeholders, one being state association executives. I invested much of that four and a half months in getting to know that group. Number two: I assessed the staff. I went to a lot of the divisional staff meetings, walked the halls, and got to know the team. And three: I did outreach to member CEOs, starting with the board, of

course, but then moving past that to CEOs of community banks, regional banks, midsize banks, and some of the larger banks. The reg ulator y and leg islative stakeholders, and people in the administration, I’ve known from the other positions I’ve had in Washington. Q2. Now that you’re past the transition, what policy or organizational areas will you be focusing on? Four areas are important from a strategic standpoint. Regulatory relief will remain hugely important, particularly given that we achieved little in the way of relief in the last session of Congress. Focusing on the supervisory framework—which is ill-suited and wrongly tailored, in my opinion, particularly for smaller banks— will remain a key area of focus in 2016 and, certainly, 2017. Number two is bank unity. Ending “bank-on-bank violence” is extremely important, particularly as it pertains to advocacy. There’s been a Balkanization of the banking sector over the last several years, much of which has been caused by the artif icial thresholds of Dodd-Frank—$1 billion, $10 billion, $50 billion. We have more influence and more

clout by working together than apart. Also, our existential threats are not banks of varying sizes, but non-bank lenders, credit unions, changing demographics, and technology. Three: Millennials are now the largest chunk of our nation’s demography at 84 million. Research suggests millennials would rather go to the dentist than hear from their bank. There’s an alarming number of them who don’t think they’ll ever need a bank—who don’t see the utility of our services. We need to think about how do we speak to them, how do we market to them. Last is the rapid convergence of banking and technology. In 2014, about $12 billion went into fintech. I suspect when they calculate 2015, it will probably be $20 billion to $40 billion. To the extent we can, we should try to partner with these companies. But, at the very least, we need to be mindful that we don’t create another unlevel playing field. We already have that with Farm Credit and credit unions. The last thing we need is a new group of market entrants offering products and services close to identical to what a bank offers, where we are highly regulated and they are not.