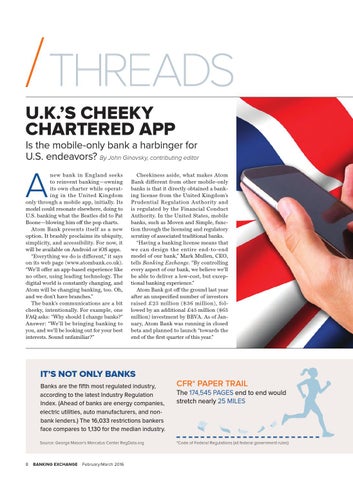 Is the mobile-only bank a harbinger for U.S. endeavors? By John Ginovsky, contributing editor

new bank in England seeks to reinvent banking—owning its own charter while operating in the United Kingdom only through a mobile app, initially. Its model could resonate elsewhere, doing to U.S. banking what the Beatles did to Pat Boone—blowing him off the pop charts. Atom Bank presents itself as a new option. It brashly proclaims its ubiquity, simplicity, and accessibility. For now, it will be available on Android or iOS apps. “Everything we do is different,” it says on its web page (www.atombank.co.uk). “We’ll offer an app-based experience like no other, using leading technology. The digital world is constantly changing, and Atom will be changing banking, too. Oh, and we don’t have branches.” The bank’s communications are a bit cheeky, intentionally. For example, one FAQ asks: “Why should I change banks?” Answer: “We’ll be bringing banking to you, and we’ll be looking out for your best interests. Sound unfamiliar?”

Cheekiness aside, what makes Atom Bank different from other mobile-only banks is that it directly obtained a banking license from the United Kingdom’s Prudential Regulation Authority and is regulated by the Financial Conduct Authority. In the United States, mobile banks, such as Moven and Simple, function through the licensing and regulatory scrutiny of associated traditional banks. “Having a banking license means that we can design the entire end-to-end model of our bank,” Mark Mullen, CEO, tells Banking Exchange. “By controlling every aspect of our bank, we believe we’ll be able to deliver a low-cost, but exceptional banking experience.” Atom Bank got off the ground last year after an unspecified number of investors raised £25 million ($36 million), followed by an additional £45 million ($65 million) investment by BBVA. As of January, Atom Bank was running in closed beta and planned to launch “towards the end of the first quarter of this year.”

It’s not only banks Banks are the fifth most regulated industry, according to the latest Industry Regulation Index. (Ahead of banks are energy companies, electric utilities, auto manufacturers, and nonbank lenders.) The 16,033 restrictions bankers face compares to 1,130 for the median industry. Source: George Mason’s Mercatus Center RegData.org