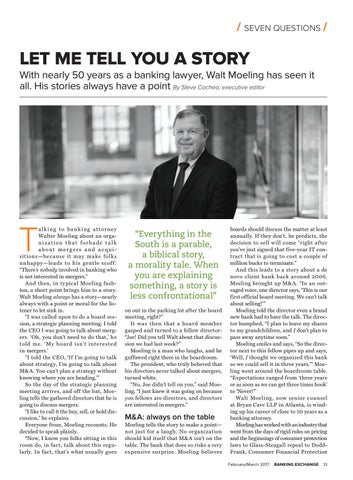 Let me tell you a story

With nearly 50 years as a banking lawyer, Walt Moeling has seen it all. His stories always have a point By Steve Cocheo, executive editor

a l k i ng t o b a n k i ng a t t or ne y Walter Moeling about an organization that forbade ta lk about mergers and acquisitions—bec ause it may ma ke folk s unhappy—leads to his gentle scof f: “There’s nobody involved in banking who is not interested in mergers.” And then, in typical Moeling fashion, a short point brings him to a story. Walt Moeling always has a story—nearly always with a point or moral for the listener to let sink in. “I was called upon to do a board session, a strategic planning meeting. I told the CEO I was going to talk about mergers. ‘Oh, you don’t need to do that,’ he t old me. ‘My boa rd i sn’t i nt ere st ed in mergers.’ “I told the CEO, ‘If I’m going to talk about strategy, I’m going to talk about M&A. You can’t plan a strategy without knowing where you are heading.’” So the day of the strategic planning meeting arrives, and off the bat, Moeling tells the gathered directors that he is going to discuss mergers. “I like to call it the buy, sell, or hold discussion,” he explains. Everyone froze, Moeling recounts. He decided to speak plainly. “Now, I know you folks sitting in this room do, in fact, talk about this regularly. In fact, that’s what usually goes

“Everything in the South is a parable, a biblical story, a morality tale. When you are explaining something, a story is less confrontational” on out in the parking lot after the board meeting, right?” It wa s then that a board member gasped and turned to a fellow director: “Joe! Did you tell Walt about that discussion we had last week?” Moeling is a man who laughs, and he guffawed right there in the boardroom. The president, who truly believed that his directors never talked about mergers, turned white. “No, Joe didn’t tell on you,” said Moeling. “I just knew it was going on because you fellows are directors, and directors are interested in mergers.”

M&A: always on the table Moeling tells the story to make a point— not just for a laugh. No organization should kid itself that M&A isn’t on the table. The bank that does so risks a very expensive surprise. Moeling believes

boards should discuss the matter at least annually. If they don’t, he predicts, the decision to sell will come “right after you’ve just signed that five-year IT contract that is going to cost a couple of million bucks to terminate.” And this leads to a story about a de novo client bank back around 2006. Moeling brought up M&A. “In an outraged voice, one director says, ‘This is our first official board meeting. We can’t talk about selling!’” Moeling told the director even a brand new bank had to have the talk. The director humphed, “I plan to leave my shares to my grandchildren, and I don’t plan to pass away anytime soon.” Moeling smiles and says, “So the director next to this fellow pipes up and says, ‘Well, I thought we organized this bank so we could sell it in three years.’” Moeling went around the boardroom table. “Expectations ranged from ‘three years or as soon as we can get three times book’ to ‘Never!’” Walt Moeling, now senior counsel at Bryan Cave LLP in Atlanta, is winding up his career of close to 50 years as a banking attorney. Moeling has worked with an industry that went from the days of rigid rules on pricing and the beginnings of consumer protection laws to Glass-Steagall repeal to DoddFrank, Consumer Financial Protection February/March 2017