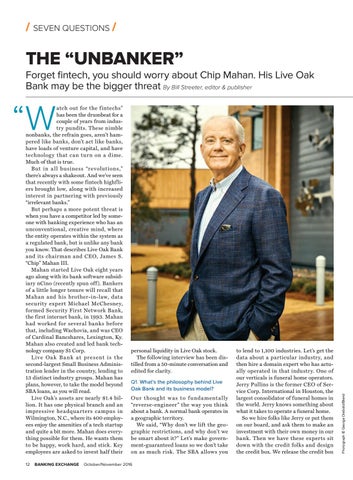 Forget fintech, you should worry about Chip Mahan. His Live Oak Bank may be the bigger threat By Bill Streeter, editor & publisher

personal liquidity in Live Oak stock. The following interview has been distilled from a 50-minute conversation and edited for clarity. Q1. What’s the philosophy behind Live Oak Bank and its business model? Our thought wa s to f unda ment a lly “reverse-engineer” the way you think about a bank. A normal bank operates in a geographic territory. We said, “Why don’t we lift the geographic restrictions, and why don’t we be smart about it?” Let’s make government-guaranteed loans so we don’t take on as much risk. The SBA allows you

to lend to 1,100 industries. Let’s get the data about a particular industry, and then hire a domain expert who has actually operated in that industry. One of our verticals is funeral home operators. Jerry Pullins is the former CEO of Service Corp. International in Houston, the largest consolidator of funeral homes in the world. Jerry knows something about what it takes to operate a funeral home. So we hire folks like Jerry or put them on our board, and ask them to make an investment with their own money in our bank. Then we have these experts sit down with the credit folks and design the credit box. We release the credit box

atch out for the f intechs” has been the drumbeat for a couple of years from industry pundits. These nimble nonbanks, the refrain goes, aren’t hampered like banks, don’t act like banks, have loads of venture capital, and have technolog y that can turn on a dime. Much of that is true. But in a ll business “revolutions,” there’s always a shakeout. And we’ve seen that recently with some fintech highf liers brought low, along with increased interest in partnering with previously “irrelevant banks.” But perhaps a more potent threat is when you have a competitor led by someone with banking experience who has an unconventional, creative mind, where the entity operates within the system as a regulated bank, but is unlike any bank you know. That describes Live Oak Bank and its chairman and CEO, James S. “Chip” Mahan III. Mahan started Live Oak eight years ago along with its bank software subsidiary nCino (recently spun off). Bankers of a little longer tenure will recall that Mahan and his brother-in-law, data security expert Michael McChesney, formed Security First Network Bank, the first internet bank, in 1993. Mahan had worked for several banks before that, including Wachovia, and was CEO of Cardinal Bancshares, Lexington, Ky. Mahan also created and led bank technology company S1 Corp. L ive Oa k Ba n k at pr e sent i s t he second-largest Small Business Administration lender in the country, lending to 13 distinct industry groups. Mahan has plans, however, to take the model beyond SBA loans, as you will read. Live Oak’s assets are nearly $1.4 billion. It has one physical branch and an impressive headquar ters campus in Wilmington, N.C., where its 400 employees enjoy the amenities of a tech startup and quite a bit more. Mahan does everything possible for them. He wants them to be happy, work hard, and stick. Key employees are asked to invest half their