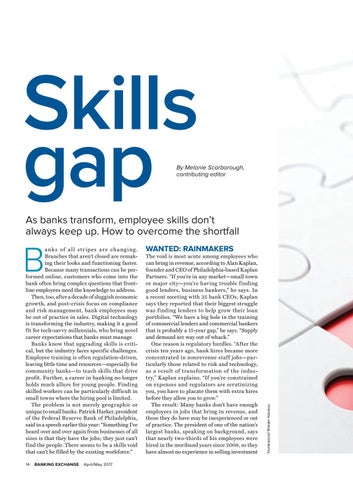 As banks transform, employee skills don’t always keep up. How to overcome the shortfall

The void is most acute among employees who can bring in revenue, according to Alan Kaplan, founder and CEO of Philadelphia-based Kaplan Partners. “If you’re in any market—small town or major city—you’re having trouble finding good lenders, business bankers,” he says. In a recent meeting with 35 bank CEOs, Kaplan says they reported that their biggest struggle was finding lenders to help grow their loan portfolios. “We have a big hole in the training of commercial lenders and commercial bankers that is probably a 15-year gap,” he says. “Supply and demand are way out of whack.” One reason is regulatory hurdles. “After the crisis ten years ago, bank hires became more concentrated in nonrevenue staff jobs—particularly those related to risk and technology, as a result of transformation of the industry,” Kaplan explains. “If you’re constrained on expenses and regulators are scrutinizing you, you have to placate them with extra hires before they allow you to grow.” The result: Many banks don’t have enough employees in jobs that bring in revenue, and those they do have may be inexperienced or out of practice. The president of one of the nation’s largest banks, speaking on background, says that nearly two-thirds of his employees were hired in the moribund years since 2008, so they have almost no experience in selling investment

a n k s of a l l s t r ip e s a re cha ng i ng. Branches that aren’t closed are remaking their looks and functioning faster. Because many transactions can be performed online, customers who come into the bank often bring complex questions that frontline employees need the knowledge to address. Then, too, after a decade of sluggish economic growth, and post-crisis focus on compliance and risk management, bank employees may be out of practice in sales. Digital technology is transforming the industry, making it a good fit for tech-savvy millennials, who bring novel career expectations that banks must manage. Banks know that upgrading skills is critical, but the industry faces specific challenges. Employee training is often regulation-driven, leaving little time and resources—especially for community banks—to teach skills that drive profit. Further, a career in banking no longer holds much allure for young people. Finding skilled workers can be particularly difficult in small towns where the hiring pool is limited. The problem is not merely geographic or unique to small banks. Patrick Harker, president of the Federal Reserve Bank of Philadelphia, said in a speech earlier this year: “Something I’ve heard over and over again from businesses of all sizes is that they have the jobs; they just can’t find the people. There seems to be a skills void that can’t be filled by the existing workforce.”