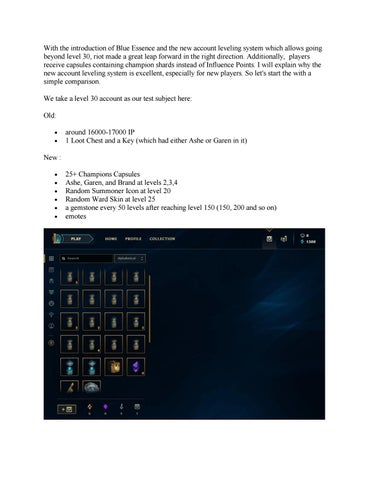 With the introduction of Blue Essence and the new account leveling system which allows going beyond level 30, riot made a great leap forward in the right direction. Additionally, players receive capsules containing champion shards instead of Influence Points. I will explain why the new account leveling system is excellent, especially for new players. So let's start the with a simple comparison. We take a level 30 account as our test subject here: Old: • •

for all the non-mathematicians that haven't already figured it out, the upgrade costs are equal to 60% of the original champion price. Conclusion The new system is much better for newer players and good for everyone who wants as many of his favorite champions on his smurf as possible. The uncapped leveling system also feels more rewarding for players who have followed played League of Legends and had no progress for years (other than in ranked). On top of that active players get rewarded with emotes, gemstones and more loot. If you are looking to take advantage of those additions feel free to buy lol smurfs.