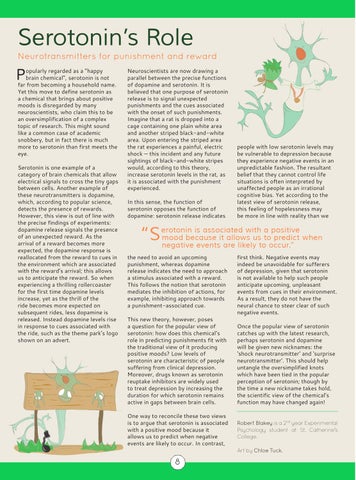 Neurotransmitters for punishment and reward

opularly regarded as a “happy brain chemical”, serotonin is not far from becoming a household name. a chemical that brings about positive moods is disregarded by many neuroscientists, who claim this to be topic of research. This might sound like a common case of academic snobbery, but in fact there is much eye. category of brain chemicals that allow electrical signals to cross the tiny gaps these neurotransmitters is dopamine, which, according to popular science, detects the presence of rewards. However, this view is out of line with dopamine release signals the presence arrival of a reward becomes more reallocated from the reward to cues in the environment which are associated with the reward’s arrival; this allows us to anticipate the reward. So when increase, yet as the thrill of the subsequent rides, less dopamine is released. Instead dopamine levels rise in response to cues associated with the ride, such as the theme park’s logo shown on an advert.

Neuroscientists are now drawing a parallel between the precise functions of dopamine and serotonin. It is believed that one purpose of serotonin punishments and the cues associated with the onset of such punishments. Imagine that a rat is dropped into a cage containing one plain white area and another striped black-and-white area. Upon entering the striped area shock — this incident and any future sightings of black-and-white stripes would, according to this theory, increase serotonin levels in the rat, as it is associated with the punishment In this sense, the function of serotonin opposes the function of

people with low serotonin levels may be vulnerable to depression because unpredictable fashion. The resultant belief that they cannot control life situations is often interpreted by cognitive bias. Yet according to the latest view of serotonin release, this feeling of hopelessness may be more in line with reality than we

of depression, given that serotonin is not available to help such people anticipate upcoming, unpleasant events from cues in their environment. As a result, they do not have the neural chance to steer clear of such negative events. Once the popular view of serotonin catches up with the latest research, perhaps serotonin and dopamine ‘shock neurotransmitter’ and ‘surprise neurotransmitter’. This should help which have been tied in the popular perception of serotonin; though by the time a new nickname takes hold, function may have changed again! Robert Blakey is a 2nd year Experimental Psychology student at St. Catherine’s College. Art by Chloe Tuck. 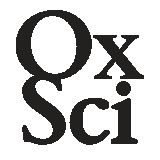