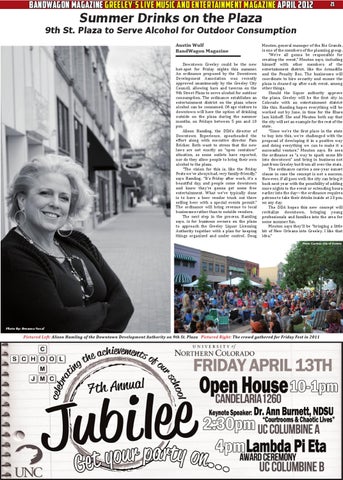 Summer Drinks on the Plaza

9th St. Plaza to Serve Alcohol for Outdoor Consumption Austin Wulf BandWagon Magazine Downtown Greeley could be the new hot-spot for Friday nights this summer. An ordinance proposed by the Downtown Development Association was recently approved unanimously by the Greeley City Council, allowing bars and taverns on the 9th Street Plaza to serve alcohol for outdoor consumption. The ordinance establishes an entertainment district on the plaza where alcohol can be consumed. Of-age visitors to downtown will have the option of drinking outside on the plaza during the summer months, on Fridays between 5 pm and 10 pm. Alison Hamling, the DDA’s director of Downtown Experience, spearheaded the effort along with executive director Pam Bricker. Both want to stress that the new laws are not exactly an “open container” situation, as some outlets have reported, nor do they allow people to bring their own alcohol to the plaza. “The vision for this is, like the Friday Fests we’ve always had, very family-friendly,” says Hamling. “It’s Friday after work, it’s a beautiful day, and people come downtown and know they’re gonna get some free entertainment. What we’ve typically done is to have a beer vendor truck out there selling beer with a special events permit.” The ordinance will bring revenue to local businesses rather than to outside vendors. The next step in the process, Hamling says, is for business owners on the plaza to approach the Greeley Liquor Licensing Authority together with a plan for keeping things organized and under control. Doug

Mouton, general manager of the Rio Grande, is one of the members of the planning group. “We’re all gonna be responsible for creating the event,” Mouton says, including himself with other members of the entertainment district, like the Armadillo and the Penalty Box. The businesses will coordinate to hire security and ensure the plaza is cleaned up after each event, among other things. Should the liquor authority approve the plans, Greeley will be the first city in Colorado with an entertainment district like this. Hamling hopes everything will be worked out by June, in time for the Blues Jam kickoff. She and Mouton both say that the city will set an example for the rest of the state. “Since we’re the first place in the state to buy into this, we’re challenged with the proposal of developing it in a positive way and doing everything we can to make it a successful venture,” Mouton says. He sees the ordinance as “a way to spark some life into downtown” and bring in business not just from Greeley but from all over the state. The ordinance carries a one-year sunset clause in case the concept is not a success. However, if all goes well, the city can bring it back next year with the possibility of adding more nights to the event or extending hours earlier into the day—the ordinance requires patrons to take their drinks inside at 10 pm. on any day. The DDA hopes this new concept will revitalize downtown, bringing young professionals and families into the area for some summer fun. Mouton says they’ll be “bringing a little bit of New Orleans into Greeley. I like that idea.” Photo Coutesy: City of Greeley

The BandWagon is a monthly publication. Our goal is to help cultivate and report upon live music, arts, and entertainment in Greeley, Colorado and around the world.