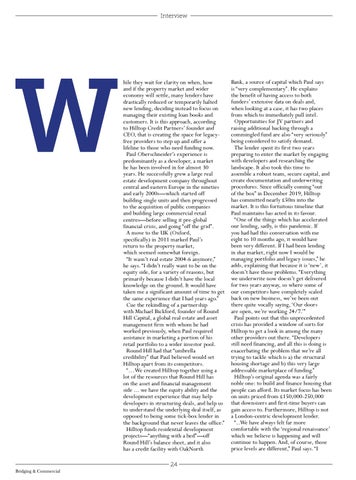 hile they wait for clarity on when, how and if the property market and wider economy will settle, many lenders have drastically reduced or temporarily halted new lending, deciding instead to focus on managing their existing loan books and customers. It is this approach, according to Hilltop Credit Partners’ founder and CEO, that is creating the space for legacyfree providers to step up and offer a lifeline to those who need funding now. Paul Oberschneider’s experience is predominantly as a developer, a market he has been involved in for almost 30 years. He successfully grew a large real estate development company throughout central and eastern Europe in the nineties and early 2000s—which started off building single units and then progressed to the acquisition of public companies and building large commercial retail centres—before selling it pre-global financial crisis, and going “off the grid”. A move to the UK (Oxford, specifically) in 2011 marked Paul’s return to the property market, which seemed somewhat foreign. “It wasn’t real estate 2004-6 anymore,” he says. “I didn’t really want to be on the equity side, for a variety of reasons, but primarily because I didn’t have the local knowledge on the ground. It would have taken me a significant amount of time to get the same experience that I had years ago.” Cue the rekindling of a partnership with Michael Bickford, founder of Round Hill Capital, a global real estate and asset management firm with whom he had worked previously, when Paul required assistance in marketing a portion of his retail portfolio to a wider investor pool. Round Hill had that “umbrella credibility” that Paul believed would set Hilltop apart from its competitors. “…We created Hilltop together using a lot of the resources that Round Hill has on the asset and financial management side ... we have the equity ability and the development experience that may help developers in structuring deals, and help us to understand the underlying deal itself, as opposed to being some tick-box lender in the background that never leaves the office.” Hilltop funds residential development projects—“anything with a bed”—off Round Hill’s balance sheet, and it also has a credit facility with OakNorth 24 Bridging &amp; Commercial

Bank, a source of capital which Paul says is “very complementary”. He explains the benefit of having access to both funders’ extensive data on deals and, when looking at a case, it has two places from which to immediately pull intel. Opportunities for JV partners and raising additional backing through a commingled fund are also “very seriously” being considered to satisfy demand. The lender spent its first two years preparing to enter the market by engaging with developers and researching the landscape. It also took this time to assemble a robust team, secure capital, and create documentation and underwriting procedures. Since officially coming “out of the box” in December 2019, Hilltop has committed nearly £50m into the market. It is this fortuitous timeline that Paul maintains has acted in its favour. “One of the things which has accelerated our lending, sadly, is this pandemic. If you had had this conversation with me eight to 10 months ago, it would have been very different. If I had been lending in that market, right now I would be managing portfolio and legacy issues,” he adds, explaining that because it is ‘new’, it doesn’t have those problems. “Everything we underwrite now doesn’t get delivered for two years anyway, so where some of our competitors have completely scaled back on new business, we’ve been out there quite vocally saying, ‘Our doors are open, we’re working 24/7.’” Paul points out that this unprecedented crisis has provided a window of sorts for Hilltop to get a look in among the many other providers out there. “Developers still need financing, and all this is doing is exacerbating the problem that we’re all trying to tackle which is a) the structural housing shortage and b) this very large addressable marketplace of funding.” Hilltop’s original agenda was a fairly noble one: to build and finance housing that people can afford. Its market focus has been on units priced from £150,000-250,000 that downsizers and first-time buyers can gain access to. Furthermore, Hilltop is not a London-centric development lender. “..We have always felt far more comfortable with the ‘regional renaissance’ which we believe is happening and will continue to happen. And, of course, those price levels are different,” Paul says. “I

In the ninth issue of Bridging & Commercial Magazine, we reveal the lessons learnt by business leaders during the Covid-19 pandemic, and what the landscape of the bridging market is predicted to look like later this year and beyond. Elsewhere, we have highlighted ways that the specialist finance industry has helped raise funds for the NHS and vital charities and causes throughout the lockdown period. In addition, we have interviewed bridging and development finance lenders MT Finance, Masthaven Bank and Hilltop Credit Partners to identify what has underpinned their malleability during this time, and how a stronger focus on company culture, and a new working world order is not on the horizon, but already here. You would be glad to know we have also delved into the use of mezzanine finance to plug the capital stack gap, how interest charging models may (or may not) change, and why you should be heading to virtual property auctions. Enjoy! 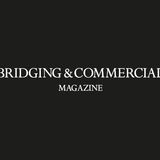 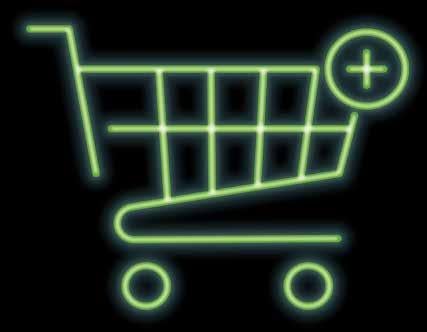