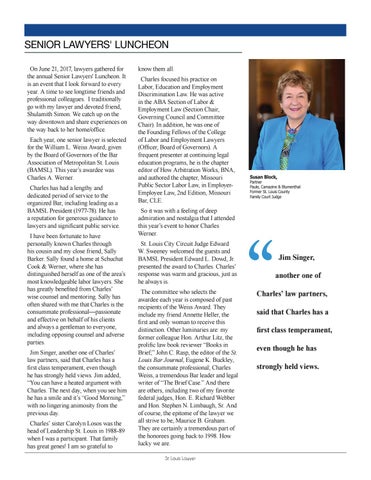 SENIOR LAWYERS' LUNCHEON On June 21, 2017, lawyers gathered for the annual Senior Lawyers' Luncheon. It is an event that I look forward to every year. A time to see longtime friends and professional colleagues. I traditionally go with my lawyer and devoted friend, Shulamith Simon. We catch up on the way downtown and share experiences on WKHZD\EDFNWRKHUKRPHRIÂżFH Each year, one senior lawyer is selected for the William L. Weiss Award, given by the Board of Governors of the Bar Association of Metropolitan St. Louis (BAMSL). This yearâ&#x20AC;&#x2122;s awardee was Charles A. Werner. Charles has had a lengthy and dedicated period of service to the organized Bar, including leading as a BAMSL President (1977-78). He has a reputation for generous guidance to ODZ\HUVDQGVLJQLÂżFDQWSXEOLFVHUYLFH I have been fortunate to have personally known Charles through his cousin and my close friend, Sally Barker. Sally found a home at Schuchat Cook & Werner, where she has distinguished herself as one of the areaâ&#x20AC;&#x2122;s most knowledgeable labor lawyers. She KDVJUHDWO\EHQHÂżWHGIURP&KDUOHVÂś wise counsel and mentoring. Sally has often shared with me that Charles is the consummate professionalâ&#x20AC;&#x201D;passionate and effective on behalf of his clients and always a gentleman to everyone, including opposing counsel and adverse parties. Jim Singer, another one of Charlesâ&#x20AC;&#x2122; law partners, said that Charles has a ÂżUVWFODVVWHPSHUDPHQWHYHQWKRXJK he has strongly held views. Jim added, â&#x20AC;&#x153;You can have a heated argument with Charles. The next day, when you see him he has a smile and itâ&#x20AC;&#x2122;s â&#x20AC;&#x153;Good Morning,â&#x20AC;? with no lingering animosity from the previous day. Charlesâ&#x20AC;&#x2122; sister Carolyn Losos was the head of Leadership St. Louis in 1988-89 when I was a participant. That family has great genes! I am so grateful to

know them all. Charles focused his practice on Labor, Education and Employment Discrimination Law. He was active in the ABA Section of Labor & Employment Law (Section Chair, Governing Council and Committee Chair). In addition, he was one of the Founding Fellows of the College of Labor and Employment Lawyers 2IÂżFHU%RDUGRI*RYHUQRUV $ frequent presenter at continuing legal education programs, he is the chapter editor of How Arbitration Works, BNA, and authored the chapter, Missouri Public Sector Labor Law, in EmployerEmployee Law, 2nd Edition, Missouri Bar, CLE.

So it was with a feeling of deep admiration and nostalgia that I attended this yearâ&#x20AC;&#x2122;s event to honor Charles Werner. St. Louis City Circuit Judge Edward W. Sweeney welcomed the guests and BAMSL President Edward L. Dowd, Jr. presented the award to Charles. Charlesâ&#x20AC;&#x2122; response was warm and gracious, just as he always is. The committee who selects the awardee each year is composed of past recipients of the Weiss Award. They include my friend Annette Heller, the ÂżUVWDQGRQO\ZRPDQWRUHFHLYHWKLV distinction. Other luminaries are: my former colleague Hon. Arthur Litz, the SUROLÂżFODZERRNUHYLHZHUÂł%RRNVLQ Brief;â&#x20AC;? John C. Rasp, the editor of the St. Louis Bar Journal, Eugene K. Buckley, the consummate professional; Charles Weiss, a tremendous Bar leader and legal writer of â&#x20AC;&#x153;The Brief Case.â&#x20AC;? And there are others, including two of my favorite federal judges, Hon. E. Richard Webber and Hon. Stephen N. Limbaugh, Sr. And of course, the epitome of the lawyer we all strive to be, Maurice B. Graham. They are certainly a tremendous part of the honorees going back to 1998. How lucky we are. St. Louis Lawyer

Jim Singer, another one of Charlesâ&#x20AC;&#x2122; law partners, said that Charles has a ÂżUVWFODVVWHPSHUDPHQW even though he has strongly held views.

,DPWKHEHQHÂ¿FLDU\RIPDQ\VHQLRUODZ\HUVVRPHGHFHDVHG and some still with us. 0DUYLQ46LOYHUFRXOGÂ¿QGMXGLFLDOHUURULQHYHU\FDVH, ORVWLQWKRVHÂ¿UVWIHZ\HDUVRISULYDWHSUDFWLFH,KDYHQÂ¶WORVW any since.) He taught me to never forget to check the advance sheets (remember those), that a Judge cannot take judicial notice of a municipal ordinance and that an individual cannot represent his own closely held corporation.

NQHZDQGWKHQQRVHGPHRXWIRUEHLQJWKHÂ¿UVWZRPDQMXGJH in St. Louis County through getting appointed as a Magistrate prior to my investiture. Guess what: she deserved it! I wish she were still here to attend the Senior Lawyers' Luncheon. Please put June 21, 2018, on your calendar and join me as we honor these tremendous lawyers.

7KRVHDOOVHHPOLNHREYLRXVOHJDOFRQFHSWVEXWWRDÃ&#x20AC;HGJOLQJ lawyer, they were great unknowns. Marvin would come into P\RIÂ¿FHZKLFKZDVLQIDFWRXURIÂ¿FHOLEUDU\DQGSLFNRXWWKH book which had the case he wanted just by the SW Reporter number. I was in awe of his tremendous knowledge of the law and his archivist memory of cases, date and subject matter. How fortunate I was to know him! Oh yes, he always told me to strike women from the juries if my client was a woman, as he believed that women were harder on other women than men were. Now that was hard to hear, but sometimes it turned out to be true. Besides that, he solicited other attorneys for campaign funds when I ran for Magistrate and he was quite successful! Thank you, Marvin. Rest in peace. The senior lawyer and deceased retired jurist I miss the most is, of course, my former colleague and friend, the Honorable $QQ41LHGHUODQGHU6KHZDVWKHÂ¿UVWZRPDQODZ\HU,UHDOO\ 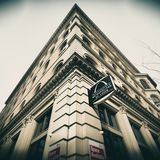