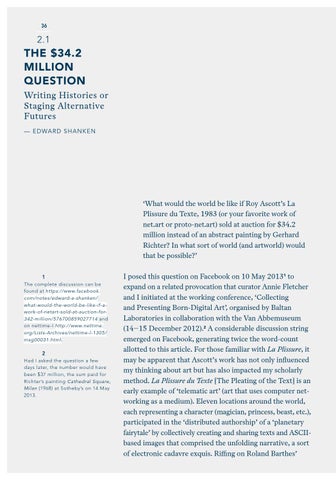 ‘ What would the world be like if Roy Ascott’s La Plissure du Texte, 1983 (or your favorite work of net.art or proto-net.art) sold at auction for $34.2 million instead of an abstract painting by Gerhard Richter? In what sort of world (and artworld) would that be possible?’

I posed this question on Facebook on 10 May 20131 to expand on a related provocation that curator Annie Fletcher and I initiated at the working conference, ‘Collecting and Presenting Born-Digital Art’, organised by Baltan Laboratories in collaboration with the Van Abbemuseum (14–15 December 2012).2 A considerable discussion string emerged on Facebook, generating twice the word-count allotted to this article. For those familiar with La Plissure, it may be apparent that Ascott’s work has not only influenced my thinking about art but has also impacted my scholarly method. La Plissure du Texte [The Pleating of the Text] is an early example of ‘telematic art’ (art that uses computer networking as a medium). Eleven locations around the world, each representing a character (magician, princess, beast, etc.), participated in the ‘distributed authorship’ of a ‘planetary fairytale’ by collectively creating and sharing texts and ASCIIbased images that comprised the unfolding narrative, a sort of electronic cadavre exquis. Riffing on Roland Barthes’

There is a growing understanding of the use of technological tools for dissemination or mediation in the museum, but artistic experiences that are facilitated by new technologies are less familiar. Whereas the artworks’ presentation equipment becomes obsolete and software updates change settings and data feeds that are used in artworks, the language and theory relating to these works is still being formulated. To better produce, present and preserve digital works, an understanding of their history and the material is required to undertake any in-depth inquiry into the subject. In an attempt to fill some gaps the authors in this publication discuss digital aesthetics, the notion of the archive and the function of social memory. These essays and interviews are punctuated by three future scenarios in which the authors speculate on the role and function of digital arts, artists and art organisations.