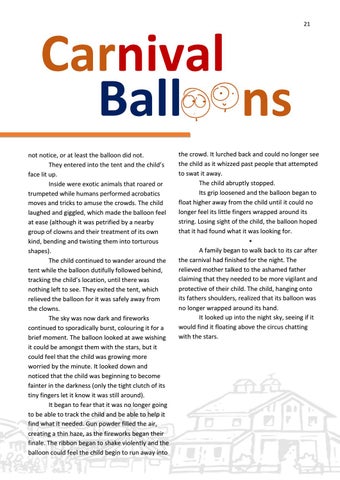 Carnival Balloons not notice, or at least the balloon did not. They entered into the tent and the childâ&#x20AC;&#x2122;s face lit up. Inside were exotic animals that roared or trumpeted while humans performed acrobatics moves and tricks to amuse the crowds. The child laughed and giggled, which made the balloon feel at ease (although it was petrified by a nearby group of clowns and their treatment of its own kind, bending and twisting them into torturous shapes). The child continued to wander around the tent while the balloon dutifully followed behind, tracking the childâ&#x20AC;&#x2122;s location, until there was nothing left to see. They exited the tent, which relieved the balloon for it was safely away from the clowns. The sky was now dark and fireworks continued to sporadically burst, colouring it for a brief moment. The balloon looked at awe wishing it could be amongst them with the stars, but it could feel that the child was growing more worried by the minute. It looked down and noticed that the child was beginning to become fainter in the darkness (only the tight clutch of its tiny fingers let it know it was still around). It began to fear that it was no longer going to be able to track the child and be able to help it find what it needed. Gun powder filled the air, creating a thin haze, as the fireworks began their finale. The ribbon began to shake violently and the balloon could feel the child begin to run away into

the crowd. It lurched back and could no longer see the child as it whizzed past people that attempted to swat it away. The child abruptly stopped. Its grip loosened and the balloon began to float higher away from the child until it could no longer feel its little fingers wrapped around its string. Losing sight of the child, the balloon hoped that it had found what it was looking for. * A family began to walk back to its car after the carnival had finished for the night. The relieved mother talked to the ashamed father claiming that they needed to be more vigilant and protective of their child. The child, hanging onto its fathers shoulders, realized that its balloon was no longer wrapped around its hand. It looked up into the night sky, seeing if it would find it floating above the circus chatting with the stars. 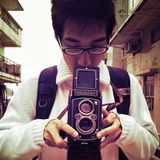