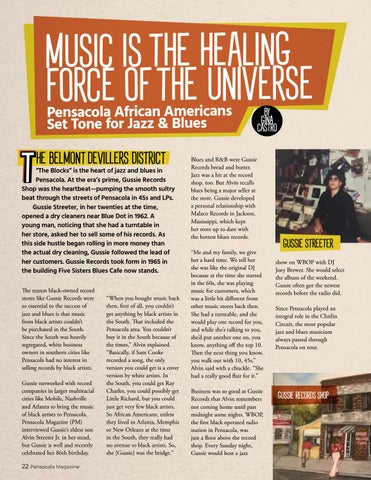 “The Blocks” is the heart of jazz and blues in Pensacola. At the era’s prime, Gussie Records Shop was the heartbeat—pumping the smooth sultry beat through the streets of Pensacola in 45s and LPs. Gussie Streeter, in her twenties at the time, opened a dry cleaners near Blue Dot in 1962. A young man, noticing that she had a turntable in her store, asked her to sell some of his records. As this side hustle began rolling in more money than the actual dry cleaning, Gussie followed the lead of her customers. Gussie Records took form in 1965 in the building Five Sisters Blues Cafe now stands. The reason black-owned record stores like Gussie Records were so essential to the success of jazz and blues is that music from black artists couldn’t be purchased in the South. Since the South was heavily segregated, white business owners in southern cities like Pensacola had no interest in selling records by black artists. Gussie networked with record companies in larger multiracial cities like Mobile, Nashville and Atlanta to bring the music of black artists to Pensacola. Pensacola Magazine (PM) interviewed Gussie’s eldest son Alvin Streeter Jr. in her stead, but Gussie is well and recently celebrated her 86th birthday. 22 Pensacola Magazine

Blues and R&amp;B were Gussie Records bread and butter. Jazz was a hit at the record shop, too. But Alvin recalls blues being a major seller at the store. Gussie developed a personal relationship with Malaco Records in Jackson, Mississippi, which kept her store up to date with the hottest blues records. “Me and my family, we give her a hard time. We tell her she was like the original DJ because at the time she started in the 60s, she was playing music for customers, which was a little bit different from other music stores back then. She had a turntable, and she would play one record for you, and while she’s talking to you, she’d put another one on, you know, anything off the top 10. Then the next thing you know, you walk out with 10, 45s,” Alvin said with a chuckle. “She had a really good flair for it.” Business was so good at Gussie Records that Alvin remembers not coming home until past midnight some nights. WBOP, the first black operated radio station in Pensacola, was just a floor above the record shop. Every Sunday night, Gussie would host a jazz

GUSSIE St reet er show on WBOP with DJ Joey Brewer. She would select the album of the weekend. Gussie often got the newest records before the radio did. Since Pensacola played an integral role in the Chitlin Circuit, the most popular jazz and blues musicians always passed through Pensacola on tour. 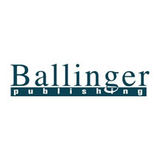