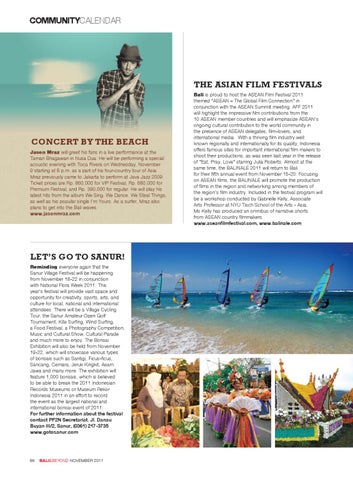 CONCERT BY THE BEACH Jason Mraz will greet his fans in a live performance at the Taman Bhagawan in Nusa Dua. He will be performing a special acoustic evening with Toca Rivera on Wednesday, November 9 starting at 8 p.m. as a part of his four-country tour of Asia. Mraz previously came to Jakarta to perform at Java Jazz 2009. Ticket prices are Rp. 860,000 for VIP Festival, Rp. 680,000 for Premium Festival, and Rp. 390,000 for regular. He will play his latest hits from the album We Sing. We Dance. We Steal Things, as well as his popular single I’m Yours. As a surfer, Mraz also plans to get into the Bali waves. www.jasonmraz.com

LET’S GO TO SANUR! Reminding everyone again that the Sanur Village Festival will be happening from November 18-22 in conjunction with National Flora Week 2011. This year’s festival will provide vast space and opportunity for creativity, sports, arts, and culture for local, national and international attendees. There will be a Village Cycling Tour, the Sanur Amateur Open Golf Tournament, Kite Surfing, Wind Surfing, a Food Festival, a Photography Competition, Music and Cultural Show, Cultural Parade and much more to enjoy. The Bonsai Exhibition will also be held from November 19-22, which will showcase various types of bonsais such as Santigi, Ficus-ficus, Sancang, Cemara, Jeruk Kingkit, Asam Jawa and many more. The exhibition will feature 1,000 bonsais, which is believed to be able to break the 2011 Indonesian Records Museums or Museum Rekor Indonesia 2011 in an effort to record the event as the largest national and international bonsai event of 2011. For further information about the festival contact PF2N Secretariat. Jl. Danau Buyan III/2, Sanur, (0361) 217-3735 www.gotosanur.com

Bali is proud to host the ASEAN Film Festival 2011 themed “ASEAN – The Global Film Connection” in conjunction with the ASEAN Summit meeting. AFF 2011 will highlight the impressive film contributions from the 10 ASEAN member countries and will emphasize ASEAN’s ongoing cultural contribution to the world community in the presence of ASEAN delegates, film-lovers, and international media. With a thriving film industry well known regionally and internationally for its quality, Indonesia offers famous sites for important international film makers to shoot their productions, as was seen last year in the release of “Eat, Pray, Love” starring Julia Roberts. Almost at the same time, the BALINALE 2011 will return to Bali for their fifth annual event from November 15-20. Focusing on ASEAN films, the BALINALE will promote the production of films in the region and networking among members of the region’s film industry. Included in the festival program will be a workshop conducted by Gabrielle Kelly, Associate Arts Professor at NYU Tisch School of the Arts - Asia. Ms Kelly has produced an omnibus of narrative shorts from ASEAN country filmmakers. www.aseanfilmfestival.com, www.balinale.com 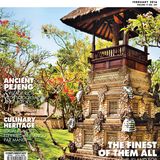