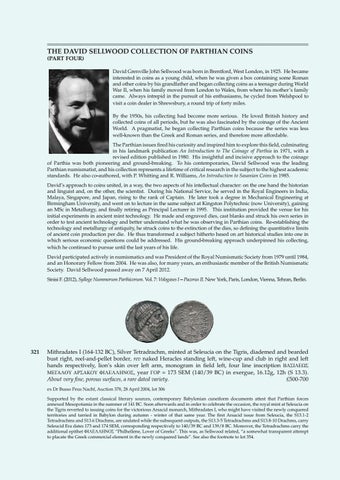 David Grenville John Sellwood was born in Brentford, West London, in 1925. He became interested in coins as a young child, when he was given a box containing some Roman and other coins by his grandfather and began collecting coins as a teenager during World War II, when his family moved from London to Wales, from where his mother’s family came. Always intrepid in the pursuit of his enthusiasms, he cycled from Welshpool to visit a coin dealer in Shrewsbury, a round trip of forty miles.

By the 1950s, his collecting had become more serious. He loved British history and collected coins of all periods, but he was also fascinated by the coinage of the Ancient World. A pragmatist, he began collecting Parthian coins because the series was less well-known than the Greek and Roman series, and therefore more affordable.

The Parthian issues fired his curiosity and inspired him to explore this field, culminating in his landmark publication An Introduction to The Coinage of Parthia in 1971, with a revised edition published in 1980. His insightful and incisive approach to the coinage of Parthia was both pioneering and ground-breaking. To his contemporaries, David Sellwood was the leading Parthian numismatist, and his collection represents a lifetime of critical research in the subject to the highest academic standards. He also co-authored, with P. Whitting and R. Williams, An Introduction to Sasanian Coins in 1985.

David’s approach to coins united, in a way, the two aspects of his intellectual character: on the one hand the historian and linguist and, on the other, the scientist. During his National Service, he served in the Royal Engineers in India, Malaya, Singapore, and Japan, rising to the rank of Captain. He later took a degree in Mechanical Engineering at Birmingham University, and went on to lecture in the same subject at Kingston Polytechnic (now University), gaining an MSc in Metallurgy, and finally retiring as Principal Lecturer in 1995. This institution provided the venue for his initial experiments in ancient mint technology. He made and engraved dies, cast blanks and struck his own series in order to test ancient technology and better understand what he was observing in Parthian coins. Re-establishing the technology and metallurgy of antiquity, he struck coins to the extinction of the dies, so defining the quantitative limits of ancient coin production per die. He thus transformed a subject hitherto based on art historical studies into one in which serious economic questions could be addressed. His ground-breaking approach underpinned his collecting, which he continued to pursue until the last years of his life.

David participated actively in numismatics and was President of the Royal Numismatic Society from 1979 until 1984, and an Honorary Fellow from 2004. He was also, for many years, an enthusiastic member of the British Numismatic Society. David Sellwood passed away on 7 April 2012.

Mithradates I (164-132 BC), Silver Tetradrachm, minted at Seleucia on the Tigris, diademed and bearded bust right, reel-and-pellet border, rev naked Heracles standing left, wine-cup and club in right and left hands respectively, lion’s skin over left arm, monogram in field left, four line inscription ΒΑΣΙΛΕΩΣ ΜΕΓΑΛΟY ΑΡΣΑΚΟY ΦΙΛΕΛΛΗΝΟΣ, year ΓΟΡ = 173 SEM (140/39 BC) in exergue, 16.12g, 12h (S 13.3). About very fine, porous surfaces, a rare dated variety. £500-700 ex Dr Busso Peus Nachf, Auction 378, 28 April 2004, lot 306 Supported by the extant classical literary sources, contemporary Babylonian cuneiform documents attest that Parthian forces annexed Mesopotamia in the summer of 141 BC. Soon afterwards and in order to celebrate the occasion, the royal mint at Seleucia on the Tigris reverted to issuing coins for the victorious Arsacid monarch, Mithradates I, who might have visited the newly conquered territories and tarried in Babylon during autumn - winter of that same year. The first Arsacid issue from Seleucia, the S13.1-2 Tetradrachms and S13.6 Drachms, are undated while the subsequent outputs, the S13.3-5 Tetradrachms and S13.8-10 Drachms, carry Seleucid Era dates 173 and 174 SEM, corresponding respectively to 140/39 BC and 139/8 BC. Moreover, the Tetradrachms carry the additional epithet ΦΙΛΕΛΛΗΝΟΣ “Philhellene, Lover of Greeks”. This was, as Sellwood related, “a somewhat transparent attempt to placate the Greek commercial element in the newly conquered lands”. See also the footnote to lot 354. 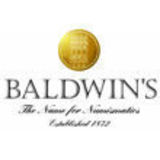