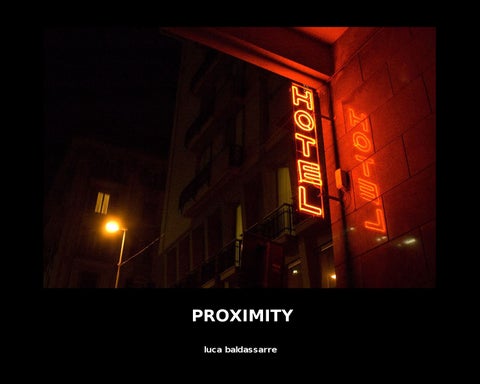 All text and photographs here contained are copyright Luca Baldassarre. This book can be distributed only as it is, without any alteration. All the photographs were taken during May 2008 in Genoa, Italy, with a Nikon D70 and a Nikkor 28mm f/2.8 This is a SoFoBoMo book 2008 (www.sofobomo.org) Author contact: Via Felice Romani 10/5 16122 Genoa Italy +39 340 96 95 991 baldazen@gmail.com

This book is dedicated to my love, Gaia.

This book is the result of my SoFoBoMo: the Solo Photographic Book Month initiative proposed by Paul Butzi. The idea was to stimulate photographers in creating a book in only one month: from shooting to editing and publishing. For this first edition the participants had to fit their solo month in the time frame 1st April and 31st May. I was not so sure to adhere in the beginning, but later changed my mind when I felt I needed a goal for my new project idea, therefore I ended up being late, but nonetheless my project was accepted and I am glad I reached the end. With Proximity I wanted to explore my neighborhood and the places I must have walked through thousands of times on my way to work or to go shopping. I tried to look very attentively and be ready for certain combinations of light and people that might hint at how life is here. Looking for photographs everyday in the same places can be frustrating at times: nothing seems to happen, everything appears dull and unattractive. But day after day I learned I could dwell on certain details, like people staring at shopwindows or dogowners walking their animals. I paid more attention to how these familiar places change during the day and I tried to capture the rare moments when they reveal themselves. This is the Genoa I know best: the one closer to my home and work, but also the one I now know even better.

Via XX Settembre, waiting for the Pope

Brignole, near the Latin American kiosk

Corso Europa, near the Geology Department

Via XX Settembre, under the Monumental Bridge

Brignole Station, waiting for the bus

Luca Baldassarre (b. 1980) is a physicist with a strong passion for photography. He began by photographing the grand landscapes of the Alps during his frequent treks, but an avid learner he got acquainted with the styles of the great masters and his attention veered towards a more artistic approach. He is now trying to strike a balance between his interest in street photography, the search for a more personal style and the love of nature.

Exploring familiar places in Genoa, Italy, for my SoFoBoMo 2008.