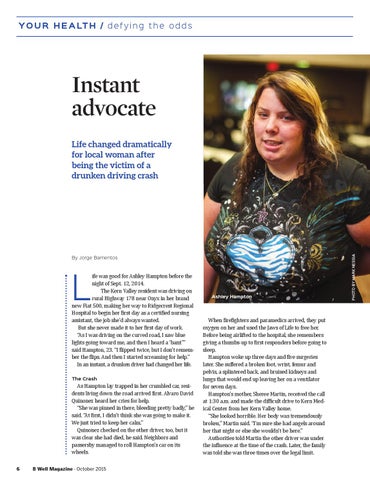 ife was good for Ashley Hampton before the night of Sept. 12, 2014. The Kern Valley resident was driving on rural Highway 178 near Onyx in her brand new Fiat 500, making her way to Ridgecrest Regional Hospital to begin her first day as a certified nursing assistant, the job she’d always wanted. But she never made it to her first day of work. “As I was driving on the curved road, I saw blue lights going toward me, and then I heard a ‘bam!’” said Hampton, 23. “I flipped twice, but I don’t remember the flips. And then I started screaming for help.” In an instant, a drunken driver had changed her life.

As Hampton lay trapped in her crumbled car, residents living down the road arrived first. Alvaro David Quinonez heard her cries for help. “She was pinned in there, bleeding pretty badly,” he said. “At first, I didn’t think she was going to make it. We just tried to keep her calm.” Quinonez checked on the other driver, too, but it was clear she had died, he said. Neighbors and passersby managed to roll Hampton’s car on its wheels. 6

When firefighters and paramedics arrived, they put oxygen on her and used the Jaws of Life to free her. Before being airlifted to the hospital, she remembers giving a thumbs-up to first responders before going to sleep. Hampton woke up three days and five surgeries later. She suffered a broken foot, wrist, femur and pelvis, a splintered back, and bruised kidneys and lungs that would end up leaving her on a ventilator for seven days. Hampton’s mother, Sheree Martin, received the call at 1:30 a.m. and made the difficult drive to Kern Medical Center from her Kern Valley home. “She looked horrible. Her body was tremendously broken,” Martin said. “I’m sure she had angels around her that night or else she wouldn’t be here.” Authorities told Martin the other driver was under the influence at the time of the crash. Later, the family was told she was three times over the legal limit. 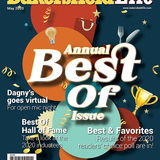