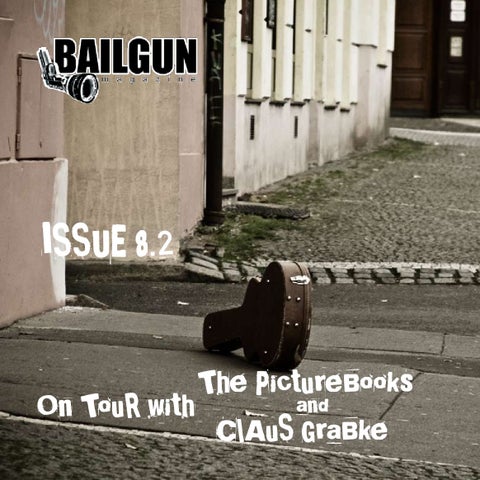 ISSUE 8.2 The PictureBooks and On TouR with ClAuS GraBke

takes us road tripping with two bands. The PICTUREBOOKS and CLAUS GRABKE on the way to the Czech Republic to play two gigs in České Budějovice and Praha. Also enjoy some pics from a gig of the INTERNATIONAL NOISE CONSPIRACY at the SO36 in Berlin.

November the 15th we embarked on a little tour through the Czeck-Republic. &quot;Final Skateboards&quot;, the leading Czeck skateboard manufacturer had invited us yet again and this time they held two parties to premiere the new &quot;Thrasher&quot; video in Budweis and Prague. Our little bus was filled with the members of &quot;Claus Grabke&quot;, &quot;The Picturebooks&quot; and photography-legend Gerd Rieger. Our first stop however wasn´t in CZ at all, it was merely in our hometown of Guetersloh, Germany. &quot;The Picturebooks&quot; opened up for an &quot;AC/DC&quot;-coverband called &quot;Barrock&quot;...wow... The stage was completely oversized, 25 meters wide, with huge cannons on both ends and a count of 20 Marshall-cabinets. Here´s a foto of Fynn Claus Grabke, who not only sings and plays guitar in &quot;The Picturebooks&quot;, but also plays bass in his father´s band &quot;Claus Grabke&quot;. On stage frenzy in Guetersloh...hells bells!

“The Picturebooks” on stage!

Gerd really likes taking pictures of people driving... The guy doesnÂ´t own a car, so i guess its in part wishful thinking... here i am...got my motor running... you know the story!

Get some sleep while you can, the rule of the road. Maddin and Fynn, sleeping away.

We stopped in Bamberg to get something to eat and saw this little skatepark...looked ok from the street but really crappy once you got closer.

The only thing worth while in that skatepark was the wallride towards the river, really kinky and not well built at all, but fun...you know what i mean? ThatÂ´s me, backside kickturning away.

Sorting out passports to avoid hassle.

It is kinda hard to follow road-side directions in CZ, because they will mostly lead you to the next city only and you need a good map. This particular map was drawn for me, by a gas-station assistant somewhere in Brno, CZ. What was she trying to say? Looks like an artefact from the blairwitch-project to me!

Signing some autographs at the Final Skateshop that organized the gig and video premier.

This is Fynn´s “VOX AC-120”. This amp once belonged to Ina Deter´s Guitarist!

â&amp;#x20AC;&amp;#x153;The Picturebooksâ&amp;#x20AC;? on stage in Budweis. Small stage, great crowd! Thanx for coffee and pizza and of course the good original Budweiser-beer.... we needed it!

Tim raising his bass in appreciation of the Budweis-crowd.

Tim raising his voice as well...

Claus with the unknown guest singer and Brett our tour guide.

Checking into the Hotel.

Checking some Video footage from the gigs.

No need to throw the TV set out of the window if you can have some fun with good ole towel fight.

Doing laundry on tour is the hardest thing. Maddin came up with this idea to get his shirt dried by the next morning.

Whoever said its not far from the hostel to the bus...

Libor Mikes carve grinds the stairs of his pool.

Claus with a proper fs rock with wheels on deck, thatÂ´s how you do &#96;em

After the pool session Claus hit this car really slow while backing up and we had to wait for the cops for like two hours and after all neither car had a scratch and we made it to Praha just in time for the next gig.

Good idea, just use your snare-skin as a setlist!

Gettin stamped to get in.

Tim, half man, half animal

Loads of sexy dancers in this town.

Fynn singing into his guitar....

After the Picturebooks Claus took over the stage with Sven and Fynn supporting him.

Claus singing into his guitar.

Another hotel, another morning. After a while they all feel the same... only the bed-quality differs. the bed in the middle was terrible!

A room with a view.

Maddin got given this card: free admission to “sexy-shop”...

Many sights to be seen in Prague. Monster Magnet where there too...seeing the same sights as us...

You could rent this guy for a walk through prague.

The BAILGUN BLACK BLOG COLLECTION - over 250 pages of images from the Black Blog Available at www.bailgun.com

Issue 8.2 takes us road tripping with two bands: The Picturebooks and Claus Grabke on the way to the Czech Republic 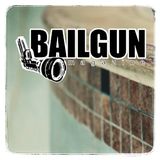