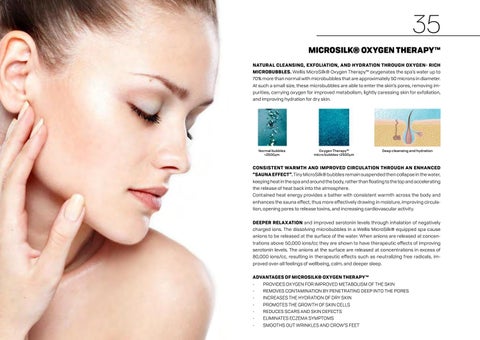 35 MICROSILK® OXYGEN THERAPY™ NATURAL CLEANSING, EXFOLIATION, AND HYDRATION THROUGH OXYGEN- RICH MICROBUBBLES. Wellis MicroSilk® Oxygen Therapy™ oxygenates the spa’s water up to 70% more than normal with microbubbles that are approximately 50 microns in diameter. At such a small size, these microbubbles are able to enter the skin’s pores, removing impurities, carrying oxygen for improved metabolism, lightly caressing skin for exfoliation, and improving hydration for dry skin.

CONSISTENT WARMTH AND IMPROVED CIRCULATION THROUGH AN ENHANCED “SAUNA EFFECT”. Tiny MicroSilk® bubbles remain suspended then collapse in the water, keeping heat in the spa and around the body, rather than floating to the top and accelerating the release of heat back into the atmosphere. Contained heat energy provides a bather with consistent warmth across the body and enhances the sauna effect, thus more effectively drawing in moisture, improving circulation, opening pores to release toxins, and increasing cardiovascular activity. DEEPER RELAXATION and improved serotonin levels through inhalation of negatively charged ions. The dissolving microbubbles in a Wellis MicroSilk® equipped spa cause anions to be released at the surface of the water. When anions are released at concentrations above 50,000 ions/cc they are shown to have therapeutic effects of improving serotonin levels. The anions at the surface are released at concentrations in excess of 80,000 ions/cc, resulting in therapeutic effects such as neutralizing free radicals, improved over-all feelings of wellbeing, calm, and deeper sleep. ADVANTAGES OF MICROSILK® OXYGEN THERAPY™ • PROVIDES OXYGEN FOR IMPROVED METABOLISM OF THE SKIN • REMOVES CONTAMINATION BY PENETRATING DEEP INTO THE PORES • INCREASES THE HYDRATION OF DRY SKIN PROMOTES THE GROWTH OF SKIN CELLS • REDUCES SCARS AND SKIN DEFECTS • ELIMINATES ECZEMA SYMPTOMS • SMOOTHS OUT WRINKLES AND CROW’S FEET • 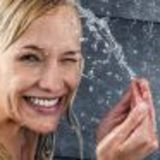