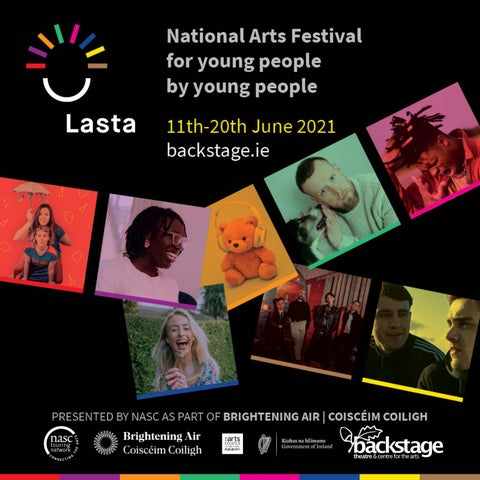 By Young People for Young People In an innovative approach to programming, twenty-one young curators have been engaged by the NASC Theatre Network to programme Lasta, a festival of work for children and young people from 11th to 20th June 2021, delivering for the first time, a national arts programme curated entirely by young people. Lasta is presented as part of Brightening Air | Coiscéim Coiligh, a nationwide, ten day season of arts experiences brought to you by the Arts Council. Under the guidance of theatre artists Maisie Lee and Fionn Foley, these young people will work collaboratively to deliver an ambitious programme of work for young people across the country. Featuring multiple disciplines and reflecting the diversity of modern Ireland, this pioneering project offers a unique opportunity to develop our future arts programmers and producers. For more information on Brightening Air www.brighteningair.com. Brightening Air | Coiscéim Coiligh is brought to you by the Arts Council, funded by the Government of Ireland and produced by Schweppe Curtis Nunn. Lasta is based on an original project conceived and delivered by Backstage Theatre, Longford in 2020. Instagram @lastafestival2021 Facebook.com/lastafestival2021 TikTok @lastafestival21 Twitter.com @lfestival2021 Youtube @Lasta Festival

A note from our Young Curators... We are thrilled to be back working on Backstage Theatre’s Young Curators Programme in preparation for Lasta Festival 2021. As one of eight NASC venues taking part this year, we have learned the power of collaboration and idea-sharing, made new connections, as well as friends and encountered a wider range of perspectives and possibilities, thanks to our 18 fellow Young Curators. This collaboration, combined with our learning from last year and the many valiant virtual festivals that have taken place since then, has allowed us to be even more ambitious for this year’s festival, bringing our young people an array of events that’s even bigger, better and bolder than ever before! Being in our early twenties, we understand that you, the young people of Longford, have lost out on a lot this year. So, alongside a diverse programme of arts events, we also wanted to give you the opportunity to showcase the talents, ideas and skills you’ve been honing at home, waiting for the world to re-open. Following a huge number of show-stopping entries, we are so excited to present our "Night is Young" showcase, and our "Young Creatives Panel Discussion", both proving that you never needed bright lights and big stages to really make your voices heard. Finally, we’d like to thank Mona, Janice and the Backstage staff for always supporting and trusting us, Maisie Lee and Fionn Foley for their consistent wisdom and guidance, Anna Considine for taking our online presence to the next level, our fellow Young Curators for their ideas, energy and co-operation and all of the artists programmed for the phenomenal pieces you can enjoy over the next 10 days. Our only hope is that you enjoy Lasta Festival just as much as we have enjoyed putting it together! Emer, Daire & Maria

We are delighted to bring you Soda Blonde as the opening act for Lasta Festival. With their previous band – the internationally renowned Little Green Cars – the artists behind Soda Blonde produced a seminal album which skyrocketed to number one across the irish charts. Now, in 2021, they are gearing up to release their debut album as Soda Blonde entitled Small Talk – (although, if there's one thing Dubliner's never do, it's mince words). Set for release on June 9th via Velveteen, the entirely self-produced album will see the members reflect on their twenty-something experiences with refreshing honesty THURS 10TH JUNE || 7PM || FREE EVENT STREAMING ON LASTA'S YOUTUBE CHANNEL: @LASTAFESTIVAL

Adole Ta! A-do-le-TA! is a dance theatre piece that joyously explores friendship and play for children aged 3 – 6. This vibrant piece focuses on the importance of play, especially free play during early childhood. A highly imaginative and slightly abstract piece, A-do-le-TA! explores a day in the life of two friends. Come with Joy and Sky into a world where everything is possible: a tent can be a crab, an umbrella can be a cloud and the moon can sing! Through play, two friends overcome differences and imagine and create together, expanding their reality and yours. Presented as part of Cruinniu na nOg SAT 12TH JUNE || 12PM || AVAILABLE FOR 24 HOURS 3-6 YEAR OLDS|| €5 || BOOK NOW BACKSTAGE.IE

Baby & Me An audio experience for babies and their grown-ups. Little Nightingale invite you to take a break from the daily routine, to share a special moment with your baby. Sit back and relax while we guide you through some gentle activities. This is a pre-recorded audio experience, so don’t worry – you can pause, rewind, or start again as many times as you need to. Presented as part of Cruinniú na nÓg.

MATILDA with Christopher Tendai We are delighted to have West End performer Christopher Tendai join us for one of two dance workshops that will blow your musical minds! As a cast member of Matilda on the West End, he’ll be teaching you a dance taken directly from the show. Christopher has starred in West End productions of Hamilton, Matilda, West Side Story, In The Heights as well as appearing with Fleur East, Rita Ora & on Strictly Come Dancing. Now, Christopher is an aspiring Theatre Choreographer, and Movement Director, who’s ready to deliver a unique and original approach for the new era of the Industry. Presented as part of Cruinniu na nOg SAT 12TH JUNE || KIDS || 3PM || €5 SPACES STRICTLY LIMITED BOOK NOW ON BACKSTAGE.IE

Willow Lantern Workshop Take part in a live online Willow Lantern making workshop with artist Caoimhe Dunn and learn the techniques that she uses to create large scale lanterns, puppets and props for outdoor spectacles! In this workshop, participants will create a willow structure complete with lights. Materials provided. Ideal for a family group to create together. Presented as part of Cruinniu na nOg

Hey There Black Child A dance-poetry-film collaboration featuring FELISPEAKS, a Nigerian-Irish poet, performer, playwright from Co. Longford and Tobi Balogun, a Dublin-based urban multidisciplinary creative specialising in dance and fashion. Marrying the mediums of poetry, dance and film, the narrative of this piece flows through the world being created by the dancer. The words of Felispeaks' poem Hey There Black Child speak to young people with care and gentleness, while Tobi Balogun interprets these themes through choreographed movement." TUES 15TH JUNE || 6PM || FREE EVENT BACKSTAGE.IE

DRIFTING Cian (Paul Mescal, Normal People) and Pat (Dafhyd Flynn, Michael Inside) have been joined at the hip since they were kids and have the run of their small town in the midlands. Cian is content to coast through a life of booze and casual hook-ups while Pat has begun to grow weary of his surroundings.. Drifting premiered at the Galway Film Fleadh last summer and has been shown at a number of Academy Award and BAFTAqualifying festivals since. Written, produced and directed by Longford's own Robert Higgins and Patrick McGivney of Harp Media.

Night is Young This brand-spanking-new venture, for 12-19 year olds, will showcase the very best talent that Longford – and its surrounding areas – has to offer. Following a call-out for auditions, five lucky acts were chosen by a selection panel and given exclusive access to the Backstage Theatre stage where their sets were recorded by a professional sound and visual team before being broadcast to an online audience. Lights, Camera, Action!"

HAMILTON with Christopher Tendai We are delighted to have West End performer Christopher Tendai join us for one of two dance workshops that will blow your musical minds! As a cast member of Hamilton on the West End, he’ll be teaching you a dance taken directly from the show. Christopher has starred in West End productions of Hamilton, Matilda, West Side Story, In The Heights as well as appearing with Fleur East, Rita Ora & on Strictly Come Dancing. Now, Christopher is an aspiring Theatre Choreographer, and Movement Director, who’s ready to deliver a unique and original approach for the new era of the Industry. Christopher's most recent work was his award-winning show, IDENTITY

Owen Colgan Star of the hit show, The Hardy Bucks, brings you The Dance of Life. "Life itself is an up and down roller coaster of emotion that can go from good to bad and back to good again quicker than Harry Kane can score a freekick for Spurs Football Club in the Europa Super Boys Championship. Is it our reaction to the circumstances that decide the way we live our lives?" Stick around for a collection of videos that some have been saying are the best collection of videos since Gran turismo on Playstation1. *FOLLOWED BY LIVE Q&A WITH OWEN* SAT 19TH JUNE || 6PM || €5 BOOK NOW ON BACKSTAGE.IE

An Aunt Called Amy This is a story about an ant called Amy, her brother Andy and a brown spider. Amy the ant works very hard. When she wins the Employee of the Month Award Amy feels a happiness that drives her to work even harder. But with the help of the Brown Spider Amy finds true happiness by embracing her brother's memory in the everyday. A story about a busy little ant who learns to slow down. Written & performed by Julie Sharkey, Artist in Residence in Roscommon Arts Centre, mentored by Martin Drury and Mikel Murfi. Presented as part of Criunniu na nOg SUN 20TH JUNE || 11AM || AVAILABLE FOR 24 HOURS €5 || AGE 5-8 BOOKING BACKSTAGE.IE

Young Creatives Panel Join a conversation with social media influencer Nia Gallagher, successful makeup artist Niamh O’Brien, Adam Fenelon, a member of the band Rêves and talented musician K Muni. This panel discussion will open your eyes to the inspirational youth of Longford and the difference these young adults have made during such a time of uncertainty. 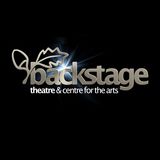 Lasta is a jam-packed, nationwide arts festival for young people, curated by young people and presented by NASC Network as part of Brighteni...

Lasta is a jam-packed, nationwide arts festival for young people, curated by young people and presented by NASC Network as part of Brighteni...