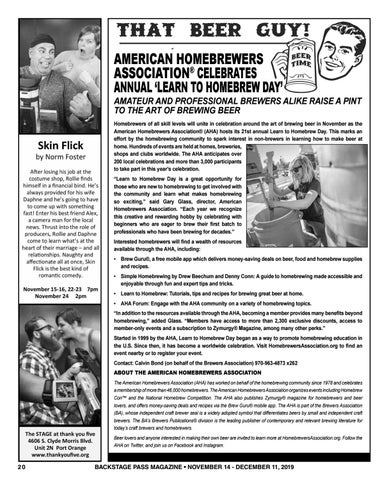 AMATEUR AND PROFESSIONAL BREWERS ALIKE RAISE A PINT TO THE ART OF BREWING BEER Homebrewers of all skill levels will unite in celebration around the art of brewing beer in November as the American Homebrewers Association® (AHA) hosts its 21st annual Learn to Homebrew Day. This marks an effort by the homebrewing community to spark interest in non-brewers in learning how to make beer at home. Hundreds of events are held at homes, breweries, shops and clubs worldwide. The AHA anticipates over 200 local celebrations and more than 3,000 participants to take part in this year’s celebration. “Learn to Homebrew Day is a great opportunity for those who are new to homebrewing to get involved with the community and learn what makes homebrewing so exciting,” said Gary Glass, director, American Homebrewers Association. “Each year we recognize this creative and rewarding hobby by celebrating with beginners who are eager to brew their first batch to professionals who have been brewing for decades.” Interested homebrewers will find a wealth of resources available through the AHA, including: • Brew Guru®, a free mobile app which delivers money-saving deals on beer, food and homebrew supplies and recipes. • Simple Homebrewing by Drew Beechum and Denny Conn: A guide to homebrewing made accessible and enjoyable through fun and expert tips and tricks. • Learn to Homebrew: Tutorials, tips and recipes for brewing great beer at home. • AHA Forum: Engage with the AHA community on a variety of homebrewing topics. “In addition to the resources available through the AHA, becoming a member provides many benefits beyond homebrewing,” added Glass. “Members have access to more than 2,300 exclusive discounts, access to member-only events and a subscription to Zymurgy® Magazine, among many other perks.” Started in 1999 by the AHA, Learn to Homebrew Day began as a way to promote homebrewing education in the U.S. Since then, it has become a worldwide celebration. Visit HomebrewersAssociation.org to find an event nearby or to register your event. Contact: Calvin Bond (on behalf of the Brewers Association) 970-963-4873 x262 ABOUT THE AMERICAN HOMEBREWERS ASSOCIATION The American Homebrewers Association (AHA) has worked on behalf of the homebrewing community since 1978 and celebrates a membership of more than 46,000 homebrewers. The American Homebrewers Association organizes events including Homebrew Con™ and the National Homebrew Competition. The AHA also publishes Zymurgy® magazine for homebrewers and beer lovers, and offers money-saving deals and recipes via the Brew Guru® mobile app. The AHA is part of the Brewers Association (BA), whose independent craft brewer seal is a widely adopted symbol that differentiates beers by small and independent craft brewers. The BA’s Brewers Publications® division is the leading publisher of contemporary and relevant brewing literature for today’s craft brewers and homebrewers. Beer lovers and anyone interested in making their own beer are invited to learn more at HomebrewersAssociation.org. Follow the AHA on Twitter, and join us on Facebook and Instagram.