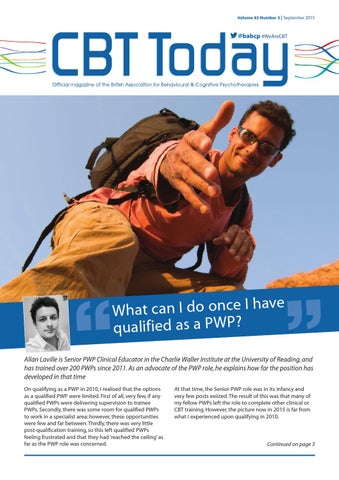 ve What can I do once I ha qualified as a PWP?

Allán Laville is Senior PWP Clinical Educator in the Charlie Waller Institute at the University of Reading, and has trained over 200 PWPs since 2011. As an advocate of the PWP role, he explains how far the position has developed in that time On qualifying as a PWP in 2010, I realised that the options as a qualified PWP were limited. First of all, very few, if any qualified PWPs were delivering supervision to trainee PWPs. Secondly, there was some room for qualified PWPs to work in a specialist area; however, these opportunities were few and far between. Thirdly, there was very little post-qualification training, so this left qualified PWPs feeling frustrated and that they had ‘reached the ceiling’ as far as the PWP role was concerned.

At that time, the Senior PWP role was in its infancy and very few posts existed. The result of this was that many of my fellow PWPs left the role to complete other clinical or CBT training. However, the picture now in 2015 is far from what I experienced upon qualifying in 2010.