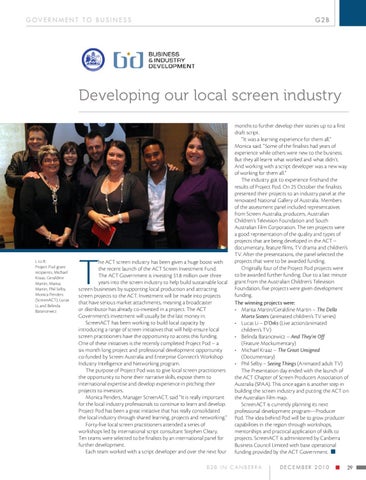 he ACT screen industry has been given a huge boost with the recent launch of the ACT Screen Investment Fund. The ACT Government is investing $1.8 million over three years into the screen industry to help build sustainable local screen businesses by supporting local production and attracting screen projects to the ACT. Investment will be made into projects that have serious market attachments, meaning a broadcaster or distributor has already co-invested in a project. The ACT Government’s investment will usually be the last money in. ScreenACT has been working to build local capacity by introducing a range of screen initiatives that will help ensure local screen practitioners have the opportunity to access this funding. One of these initiatives is the recently completed Project Pod – a six month long project and professional development opportunity co-funded by Screen Australia and Enterprise Connect’s Workshop Industry Intelligence and Networking program. The purpose of Project Pod was to give local screen practitioners the opportunity to hone their narrative skills, expose them to international expertise and develop experience in pitching their projects to investors. Monica Penders, Manager ScreenACT, said “It is really important for the local industry professionals to continue to learn and develop. Project Pod has been a great initiative that has really consolidated the local industry through shared learning, projects and networking.” Forty-five local screen practitioners attended a series of workshops led by international script consultant Stephen Cleary. Ten teams were selected to be finalists by an international panel for further development. Each team worked with a script developer and over the next four

months to further develop their stories up to a first draft script. “It was a learning experience for them all,” Monica said. “Some of the finalists had years of experience while others were new to the business. But they all learnt what worked and what didn’t. And working with a script developer was a new way of working for them all.” The industry got to experience firsthand the results of Project Pod. On 25 October the finalists presented their projects to an industry panel at the renovated National Gallery of Australia. Members of the assessment panel included representatives from Screen Australia, producers, Australian Children’s Television Foundation and South Australian Film Corporation. The ten projects were a good representation of the quality and types of projects that are being developed in the ACT – documentary, feature films, TV drama and children’s TV. After the presentations, the panel selected the projects that were to be awarded funding. Originally four of the Project Pod projects were to be awarded further funding. Due to a last minute grant from the Australian Children’s Television Foundation, five projects were given development funding. The winning projects were: • Marisa Martin/Geraldine Martin – The Della Morte Sisters (animated children’s TV series) • Lucas Li – D’Orks (Live action/animated children’s TV) • Belinda Barancewicz – And They’re Off (Feature Mockumentary) • Michael Kraaz – The Great Unsigned (Documentary) • Phil Selby – Seeing Things (Animated adult TV) The Presentation day ended with the launch of the ACT Chapter of Screen Producers Association of Australia (SPAA). This once again is another step in building the screen industry and putting the ACT on the Australian Film map. ScreenACT is currently planning its next professional development program—Producer Pod. The idea behind Pod will be to grow producer capabilities in the region through workshops, mentorships and practical application of skills to projects. ScreenACT is administered by Canberra Business Council Limited with base operational funding provided by the ACT Government. 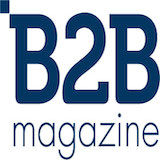