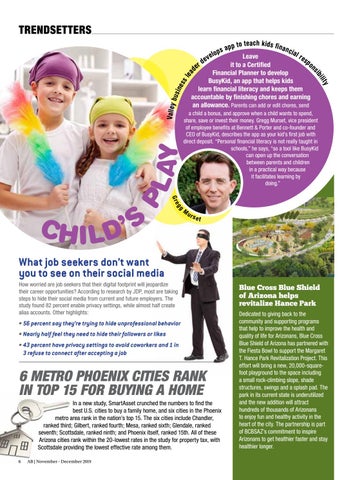 a child a bonus, and approve when a child wants to spend, share, save or invest their money. Gregg Murset, vice president of employee benefits at Bennett & Porter and co-founder and CEO of BusyKid, describes the app as your kid’s first job with direct deposit. “Personal financial literacy is not really taught in schools,” he says, “so a tool like BusyKid can open up the conversation between parents and children in a practical way because it facilitates learning by doing.”

l re Leave sp d on it to a Certified er Financial Planner to develop BusyKid, an app that helps kids learn financial literacy and keeps them accountable by finishing chores and earning an allowance. Parents can add or edit chores, send el ev

p to t each kids finan

What job seekers don’t want you to see on their social media How worried are job seekers that their digital footprint will jeopardize their career opportunities? According to research by JDP, most are taking steps to hide their social media from current and future employers. The study found 82 percent enable privacy settings, while almost half create alias accounts. Other highlights:

6 METRO PHOENIX CITIES RANK IN TOP 15 FOR BUYING A HOME In a new study, SmartAsset crunched the numbers to find the best U.S. cities to buy a family home, and six cities in the Phoenix metro area rank in the nation’s top 15. The six cities include Chandler, ranked third; Gilbert, ranked fourth; Mesa, ranked sixth; Glendale, ranked seventh; Scottsdale, ranked ninth; and Phoenix itself, ranked 15th. All of these Arizona cities rank within the 20-lowest rates in the study for property tax, with Scottsdale providing the lowest effective rate among them. 6

Blue Cross Blue Shield of Arizona helps revitalize Hance Park Dedicated to giving back to the community and supporting programs that help to improve the health and quality of life for Arizonans, Blue Cross Blue Shield of Arizona has partnered with the Fiesta Bowl to support the Margaret T. Hance Park Revitalization Project. This effort will bring a new, 20,000-squarefoot playground to the space including a small rock-climbing slope, shade structures, swings and a splash pad. The park in its current state is underutilized and the new addition will attract hundreds of thousands of Arizonans to enjoy fun and healthy activity in the heart of the city. The partnership is part of BCBSAZ’s commitment to inspire Arizonans to get healthier faster and stay healthier longer.