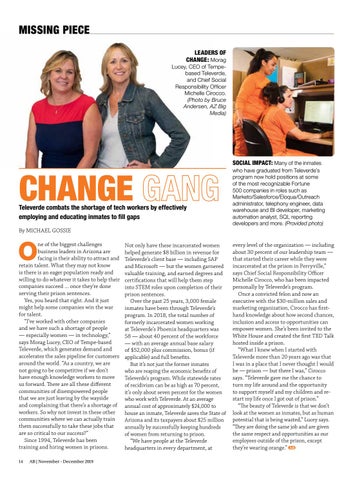 SOCIAL IMPACT: Many of the inmates who have graduated from Televerde’s program now hold positions at some of the most recognizable Fortune 500 companies in roles such as Marketo/Salesforce/Eloqua/Outreach administrator, telephony engineer, data warehouse and BI developer, marketing automation analyst, SQL reporting developers and more. (Provided photo)

ne of the biggest challenges business leaders in Arizona are facing is their ability to attract and retain talent. What they may not know is there is an eager population ready and willing to do whatever it takes to help their companies succeed … once they’re done serving their prison sentences. Yes, you heard that right. And it just might help some companies win the war for talent. “I’ve worked with other companies and we have such a shortage of people — especially women — in technology,” says Morag Lucey, CEO of Tempe-based Televerde, which generates demand and accelerates the sales pipeline for customers around the world. “As a country, we are not going to be competitive if we don’t have enough knowledge workers to move us forward. There are all these different communities of disempowered people that we are just leaving by the wayside and complaining that there’s a shortage of workers. So why not invest in these other communities where we can actually train them successfully to take these jobs that are so critical to our success?” Since 1994, Televerde has been training and hiring women in prisons.

Not only have these incarcerated women helped generate $8 billion in revenue for Televerde’s client base — including SAP and Microsoft — but the women garnered valuable training, and earned degrees and certifications that will help them step into STEM roles upon completion of their prison sentences. Over the past 25 years, 3,000 female inmates have been through Televerde’s program. In 2018, the total number of formerly incarcerated women working at Televerde’s Phoenix headquarters was 58 — about 40 percent of the workforce — with an average annual base salary of $52,000 plus commission, bonus (if applicable) and full benefits. But it’s not just the former inmates who are reaping the economic benefits of Televerde’s program. While statewide rates of recidivism can be as high as 70 percent, it’s only about seven percent for the women who work with Televerde. At an average annual cost of approximately $24,000 to house an inmate, Televerde saves the State of Arizona and its taxpayers about $25 million annually by successfully keeping hundreds of women from returning to prison. “We have people at the Televerde headquarters in every department, at

every level of the organization — including about 30 percent of our leadership team — that started their career while they were incarcerated at the prison in Perryville,” says Chief Social Responsibility Officer Michelle Cirocco, who has been impacted personally by Televerde’s program. Once a convicted felon and now an executive with the $30-million sales and marketing organization, Cirocco has firsthand knowledge about how second chances, inclusion and access to opportunities can empower women. She’s been invited to the White House and created the first TED Talk hosted inside a prison. “What I knew when I started with Televerde more than 20 years ago was that I was in a place that I never thought I would be — prison — but there I was,” Cirocco says. “Televerde gave me the chance to turn my life around and the opportunity to support myself and my children and restart my life once I got out of prison.” “The beauty of Televerde is that we don’t look at the women as inmates, but as human potential that is being wasted,” Lucey says. “They are doing the same job and are given the same respect and opportunities as our employees outside of the prison, except they’re wearing orange.”