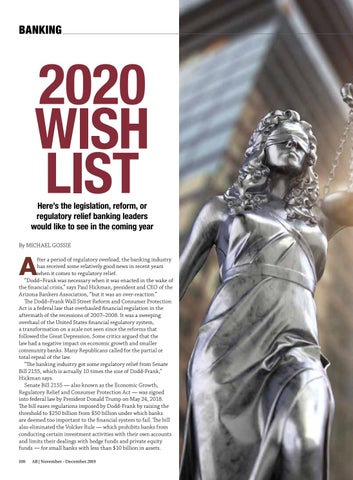 Here’s the legislation, reform, or regulatory relief banking leaders would like to see in the coming year By MICHAEL GOSSIE

fter a period of regulatory overload, the banking industry has received some relatively good news in recent years when it comes to regulatory relief. “Dodd–Frank was necessary when it was enacted in the wake of the financial crisis,” says Paul Hickman, president and CEO of the Arizona Bankers Association, “but it was an over-reaction.” The Dodd–Frank Wall Street Reform and Consumer Protection Act is a federal law that overhauled financial regulation in the aftermath of the recessions of 2007–2008. It was a sweeping overhaul of the United States financial regulatory system, a transformation on a scale not seen since the reforms that followed the Great Depression. Some critics argued that the law had a negative impact on economic growth and smaller community banks. Many Republicans called for the partial or total repeal of the law. “The banking industry got some regulatory relief from Senate Bill 2155, which is actually 10 times the size of Dodd-Frank,” Hickman says. Senate Bill 2155 — also known as the Economic Growth, Regulatory Relief and Consumer Protection Act — was signed into federal law by President Donald Trump on May 24, 2018. The bill eases regulations imposed by Dodd-Frank by raising the threshold to $250 billion from $50 billion under which banks are deemed too important to the financial system to fail. The bill also eliminated the Volcker Rule — which prohibits banks from conducting certain investment activities with their own accounts and limits their dealings with hedge funds and private equity funds — for small banks with less than $10 billion in assets. 100