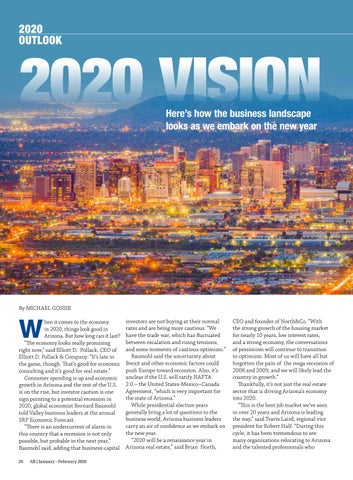 hen it comes to the economy in 2020, things look good in Arizona. But how long can it last? “The economy looks really promising right now,” said Elliott D. Pollack, CEO of Elliott D. Pollack & Company. “It’s late in the game, though. That’s good for economic consulting and it’s good for real estate.” Consumer spending is up and economic growth in Arizona and the rest of the U.S. is on the rise, but investor caution is one sign pointing to a potential recession in 2020, global economist Bernard Baumohl told Valley business leaders at the annual SRP Economic Forecast. “There is an undercurrent of alarm in this country that a recession is not only possible, but probable in the next year,” Baumohl said, adding that business-capital

investors are not buying at their normal rates and are being more cautious. “We have the trade war, which has fluctuated between escalation and rising tensions, and some moments of cautious optimism.” Baumohl said the uncertainty about Brexit and other economic factors could push Europe toward recession. Also, it’s unclear if the U.S. will ratify NAFTA 2.0 – the United States-Mexico–Canada Agreement, “which is very important for the state of Arizona.” While presidential election years generally bring a lot of questions to the business world, Arizona business leaders carry an air of confidence as we embark on the new year. “2020 will be a renaissance year in Arizona real estate,” said Brian North,

CEO and founder of North&Co. “With the strong growth of the housing market for nearly 10 years, low interest rates, and a strong economy, the conversations of pessimism will continue to transition to optimism. Most of us will have all but forgotten the pain of the mega recession of 2008 and 2009, and we will likely lead the country in growth.” Thankfully, it’s not just the real estate sector that is driving Arizona’s economy into 2020. “This is the best job market we’ve seen in over 20 years and Arizona is leading the way,” said Travis Laird, regional vice president for Robert Half. “During this cycle, it has been tremendous to see many organizations relocating to Arizona and the talented professionals who

This issue of Az Business takes a look at the impact of both the Arizona Mining Association and GPEC and how both organizations are driving...

This issue of Az Business takes a look at the impact of both the Arizona Mining Association and GPEC and how both organizations are driving...