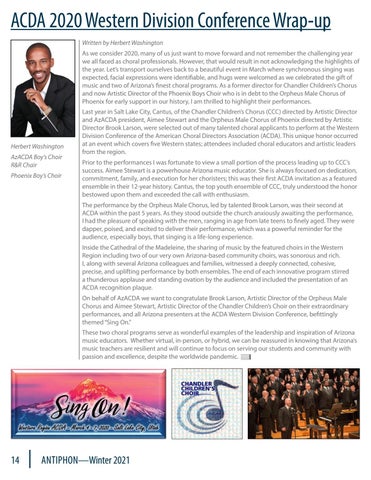 ACDA 2020 Western Division Conference Wrap-up Written by Herbert Washington As we consider 2020, many of us just want to move forward and not remember the challenging year we all faced as choral professionals. However, that would result in not acknowledging the highlights of the year. Let’s transport ourselves back to a beautiful event in March where synchronous singing was expected, facial expressions were identifiable, and hugs were welcomed as we celebrated the gift of music and two of Arizona’s finest choral programs. As a former director for Chandler Children’s Chorus and now Artistic Director of the Phoenix Boys Choir who is in debt to the Orpheus Male Chorus of Phoenix for early support in our history, I am thrilled to highlight their performances.

Last year in Salt Lake City, Cantus, of the Chandler Children’s Chorus (CCC) directed by Artistic Director and AzACDA president, Aimee Stewart and the Orpheus Male Chorus of Phoenix directed by Artistic Director Brook Larson, were selected out of many talented choral applicants to perform at the Western Division Conference of the American Choral Directors Association (ACDA). This unique honor occurred at an event which covers five Western states; attendees included choral educators and artistic leaders from the region. Prior to the performances I was fortunate to view a small portion of the process leading up to CCC’s success. Aimee Stewart is a powerhouse Arizona music educator. She is always focused on dedication, commitment, family, and execution for her choristers; this was their first ACDA invitation as a featured ensemble in their 12-year history. Cantus, the top youth ensemble of CCC, truly understood the honor bestowed upon them and exceeded the call with enthusiasm. The performance by the Orpheus Male Chorus, led by talented Brook Larson, was their second at ACDA within the past 5 years. As they stood outside the church anxiously awaiting the performance, I had the pleasure of speaking with the men, ranging in age from late teens to finely aged. They were dapper, poised, and excited to deliver their performance, which was a powerful reminder for the audience, especially boys, that singing is a life-long experience. Inside the Cathedral of the Madeleine, the sharing of music by the featured choirs in the Western Region including two of our very own Arizona-based community choirs, was sonorous and rich. I, along with several Arizona colleagues and families, witnessed a deeply connected, cohesive, precise, and uplifting performance by both ensembles. The end of each innovative program stirred a thunderous applause and standing ovation by the audience and included the presentation of an ACDA recognition plaque. On behalf of AzACDA we want to congratulate Brook Larson, Artistic Director of the Orpheus Male Chorus and Aimee Stewart, Artistic Director of the Chandler Children’s Choir on their extraordinary performances, and all Arizona presenters at the ACDA Western Division Conference, befittingly themed “Sing On.” These two choral programs serve as wonderful examples of the leadership and inspiration of Arizona music educators. Whether virtual, in-person, or hybrid, we can be reassured in knowing that Arizona’s music teachers are resilient and will continue to focus on serving our students and community with passion and excellence, despite the worldwide pandemic.

Official publication of the Arizona Chapter of the American Choral Directors Association. 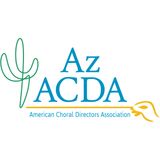