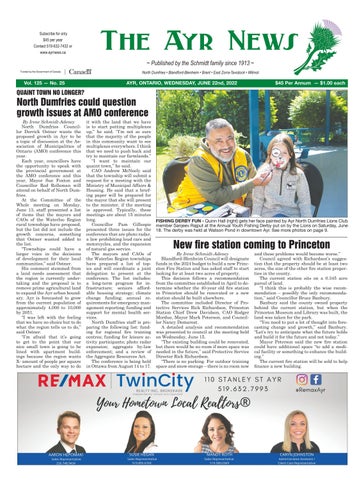 North Dumfries could question growth issues at AMO conference By Irene Schmidt-Adeney North Dumfries Councillor Derrick Ostner wants the proposed growth in Ayr to be a topic of discussion at the Association of Municipalities of Ontario (AMO) conference this year. Each year, councillors have the opportunity to speak with the provincial government at the AMO conference and this year, Mayor Sue Foxton and Councillor Rod Rolleman will attend on behalf of North Dumfries. At the Committee of the Whole meeting on Monday, June 13, staff presented a list of items that the mayors and CAOs of the Waterloo Region rural townships have proposed, but the list did not include the growth concerns, something that Ostner wanted added to the list. “Townships could have a larger voice in the decisions of development for their local communities,” said Ostner. His comment stemmed from a land needs assessment that the region is currently undertaking and the proposal is to remove prime agricultural land to expand the Ayr urban boundary. Ayr is forecasted to grow from the current population of approximately 4,000 to 10,000 by 2051. “I was left with the feeling that we have no choice but to do what the region tells us to do,” said Ostner. “I’m afraid that it’s going to get to the point that our nice small town is going to be lined with apartment buildings because the region wants X- amount of people per square hectare and the only way to do

it with the land that we have is to start putting multiplexes up,” he said. “I’m not so sure that the majority of the people in this community want to see multiplexes everywhere. I think that we need to push back and try to maintain our farmlands.” “I want to maintain our quaint town,” he said. CAO Andrew McNeely said that the township will submit a request for a meeting with the Ministry of Municipal Affairs &amp; Housing. He said that a briefing paper will be prepared for the mayor that she will present to the minister, if the meeting is approved. Typically, these meetings are about 15 minutes long. Councillor Pam Gillespie presented three issues for the conference that are photo radar, a law prohibiting loud cars and motorcycles, and the expansion of natural gas service. The mayors and CAOs of the Waterloo Region townships have prepared a list of topics and will coordinate a joint delegation to present at the conference. The list includes: a long-term program for infrastructure; seniors affordable housing strategy; climate change funding; annual requirements for emergency management reporting; funding and support for mental health services. North Dumfries staff is preparing the following list: funding for regional fire training centres; funding for leisure activity participants; photo radar expansion; aggregate by-law enforcement; and a review of the Aggregate Resources Act. The conference is being held in Ottawa from August 14 to 17.

By Irene Schmidt-Adeney Blandford-Blenheim Council will designate funds in the 2024 budget to build a new Princeton Fire Station and has asked staff to start looking for at least two acres of property. This decision follows a recommendation from the committee established in April to determine whether the 40-year old fire station in Princeton should be renovated or a new station should be built elsewhere. The committee included Director of Protective Services Rick Richardson, Princeton Station Chief Drew Davidson, CAO Rodger Mordue, Mayor Mark Peterson, and Councillor Nancy Demarest. A detailed analysis and recommendation was presented to council at the meeting held on Wednesday, June 15. “The existing building could be renovated, but there would be no room if more space was needed in the future,” said Protective Service Director Rick Richardson. “There is no parking. For outdoor training space and snow storage – there is no room now

and these problems would become worse.” Council agreed with Richardson’s suggestion that the property should be at least two acres, the size of the other fire station properties in the county. The current station sits on a 0.345 acre parcel of land. “I think this is probably the wise recommendation – possibly the only recommendation,” said Councillor Bruce Banbury. Banbury said the county owned property behind the current station, but when the Princeton Museum and Library was built, the land was taken for the park. “You need to put a lot of thought into forecasting change and growth,” said Banbury. “Let’s try to anticipate what the future holds and build it for the future and not today.” Mayor Peterson said the new fire station could have additional space “to add a medical facility or something to enhance the building.” The current fire station will be sold to help finance a new building.

The Ayr News is a weekly independent community newspaper published in Ayr, Ontario Canada since 1913 by the Schmidt family. ayrnews.ca