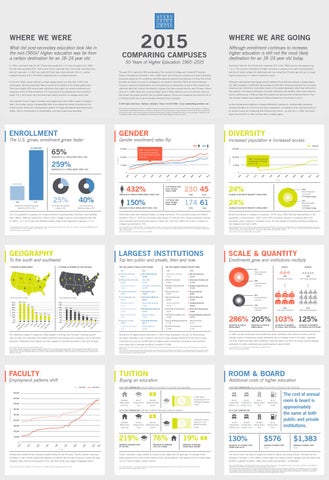 WHERE WE WERE What did post-secondary education look like in the mid-1960s? Higher education was far from a certain destination for an 18–24 year old.

WHERE WE ARE GOING

the rate never exceeded 30%. That should not be surprising since ‘blue-collar’ manufacturing jobs still abounded. In 1967 one could still finish high school and earn the U.S. median

household income of $7,143 without stepping foot in a college classroom.

Campuses posters at the conference depicting physical campus forms telling a rich story that echoes In the mid-1960s, women without a college degree earned less than half of their male

the ebbs and flows of economic, pedagogical and research directions. While we have historically

Although a stark gender earning gap persists between those with and without a college degree,

counterparts. Minority enrollment figures had yet to be tracked by the federal government.

focused on physical characteristics, we are broadening our perspective to look at both physical and

statistical data that illustrate the dramatic changes that have occurred over the past 50 years. Where

diversity at our institutions, but reflects trends in the overall population rather than from within

were we in 1965? Where are we going today? Some of these statistics such as enrollment rates are

the academy. The steady proliferation of private institutions has resulted in their outnumbering

nearly 4 to 1 and annual room and board was slightly less than an average annual rent.

well-known but deserve another look to validate progress. Others such as gender and diversity hint at

public institutions by 1,500 but they still comprise far less than half of total enrollment. Part-

a shifting societal role of post-secondary education that is evolving.

As the interdependent pattern of college affordability marches on, postsecondary education

The economic fruits of higher education were beginning to show. With 4 years of college in 1967, the median income increased $22,000, thus cutting the portion of a tuition to 6% of that income. Hence the interdependent pattern of college affordability was rooted by the

These data and pictorial diagrams are presented as a springboard for discussion and cognitive probing. We give our sincere thanks to The Chronicle of Higher Education and the National Center for Education Statistics (NCES) who have been our main sources for this research and have provided support in uncovering historical and current data. We hope you enjoy examining this information as much as we have enjoyed unearthing and interpreting it. We have gathered our statistics from multiple sources. Any errors in the presentation or interpretation are ours alone. Concept: Jim Wheeler, Luanne Greene Content: Andrew Bernish, Amy Triscoli, Amber Wendland Design: Jillian Erhardt, Lindsay Story

1960s. That is, for education to be affordable, one had to seek more education.

an annual income for households that finished high school—up from 9% in 1965. That same figure rose from 6% to 18% for those with a college degree.

INCREASE IN U.S. POPULATION SINCE 1965

remains affordable for only those who have completed it. An average tuition commands 36% of

INCREASE IN U.S. ENROLLMENT SINCE 1965

Institutional enrollment more than tripled from 1965 to 2015.

# OF FEMALE- ONLY INSTITUTIONS THEN & NOW

INCREASE IN FEMALE ENROLLMENT SINCE 1965

# OF MALE- ONLY INSTITUTIONS THEN & NOW

INCREASE IN MALE ENROLLMENT SINCE 1965

Historically males outnumbered females in college enrollment. This occurred annually and without

Minority enrollment in colleges is increasing — 370% since 1976. Minority representation in the

exception. Then, in 1979, the enrollment rates flipped. For the first time, female enrollment overtook

population is increasing too — 309% since 1976. Increased numbers of minorities within the

male enrollment and continued to grow at a faster rate. Since the 1960s the number of single-sex

population doesn’t equate to increased access. The percentage of minorities attending college has

colleges has declined by 75%.

To the south and southwest % CHANGE IN ENROLLMENT

Top ten public and private, then and now

% CHANGE IN NUMBER OF INSTITUTIONS

INCREASE IN NUMBER OF PUBLIC INSTITUTIONS

INCREASE IN NUMBER OF PRIVATE INSTITUTIONS

The traditional hotspot of academia in New England is shifting. Over the past 3 decades, growth

Among the 10 largest private institutions in 1967, 8 have remained in the top 10. While among

In 1965, as now, there were more private than public institutions from which to choose. And the

rates for both new institutions and student enrollment are heading south, southwest, and to the Rocky

the public institutions, just 5 remain in the top 10 today. Average enrollment for the top 10 public

institutions has risen by 16,188 while the largest private institutional enrollments have remained

less than 2,000. But with public institutions, there are fewer from which to choose, and the average

more stable with an average enrollment increase of 4,908.

enrollment for public institutions has nearly doubled to about 9,500.

Notes: Total enrollment data for public and private institutions was filtered by the following for 2013: Sort Institutions on One Variable, U.S. only, Degree-granting, Public 4-year or above or Private not-for-profit 4-year or above, Fall enrollment, Gender, attendance status, and level of student, All students, Grand total, then Exclusively distance education enrollment was subtracted out. Only main campuses included in enrollment totals from NCES.

In 1967 tuition required about 10% of the Median Household Income

Today tuition requires about 25% of the Median Household Income

The cost of annual room & board is approximately the same at both public and private institutions.

76% INCREASE IN AVERAGE COST OF A HOME

Institutional enrollment has increased steadily during the last 50 years. Faculty numbers have also

Tuition consumes a larger portion of annual income today than 50 years ago. An average tuition

The cost of room and board is roughly the same for public and private schools. That fact has not

increased. In fact, faculty growth has outpaced enrollment. But the type of faculty is what has really

today requires 167% more of the median income. By comparison, the median price for a home takes

changed in 50 years. In the 1960s, at both public and private schools, average room and board cost

up 47% more of today’s median income.

Notes: Student fees were collected separate from tuition beginning 1999 by NCES; Student fee data was filtered by the following for 1999-2013: Create Group Statistics, U.S. only, First Look Universe or E.D. Tab Universe, Degree granting, Public 4-year or above or Private not-for-profit 4-year and above, Student charges, Student charges (academic year programs), Tuition and fees for undergraduate and graduate students, In-state required fees for full-time undergraduates. 1965 average monthly gross rent was estimated from 1960 and 1970 data. Prior to 1999-2000, room and board for private institutions was not broken out by for-profit and nonprofit. Values adjusted for inflation using BLS Inflation Calculator. 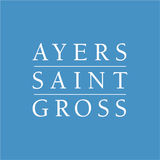