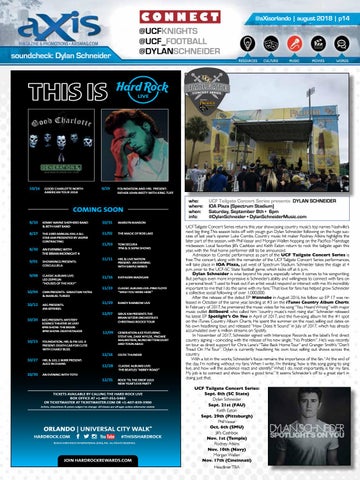 THE MAGIC OF ROB LAKE

AN EVENING WITH THE BRIAN MCKNIGHT 4

AN EVENING WITH TOTO

TICKETS AVAILABLE BY CALLING THE HARD ROCK LIVE BOX OFFICE AT +1-407-351-5483 OR TICKETMASTER AT TICKETMASTER.COM OR +1-407-839-3900 Artists, showtimes &amp; prices subject to change. All shows are all ages unless otherwise stated.

UCF Tailgate Concert Series returns this year showcasing country music’s top names Nashville’s next big thing. This season kicks off with yougn gun Dylan Schneider following on the huge success of last year’s opener Luke Combs. Country music hit maker Rodney Atkins highlights the later part of the season, with Phil Vassar and Morgan Wallen hopping on the Pacifico Mainstage midseason. Local favorites Jill’s Cashbox and Keith Eaton return to rock the tailgate again this year, with the final home performer still to be announced. Admission to Combs’ performance as part of the UCF Tailgate Concert Series is free. The concert, along with the remainder of the UCF Tailgate Concert Series performances, will take place in IOA Plaza, just west of Spectrum Stadium. Schneider takes the stage at 4 p.m. prior to the UCF-SC State football game, which kicks off at 6 p.m. Dylan Schneider is wise beyond his years, especially when it comes to his songwriting. But perhaps even more impressive is Schneider’s ability and willingness to connect with fans on a personal level. “I used to freak out if an artist would respond or interact with me. It’s incredibly important to me that I do the same with my fans.”That love for fans has helped grow Schneider a collective social following of over 1,000,000. After the release of the debut EP Wannabe in August 2016, his follow up EP 17 was released in October of the same year, landing at #3 on the iTunes Country Album Charts. In February of 2017, he premiered the music video for his song “You Heard Wrong” with major music outlet Billboard, who called him “country music’s next rising star.” Schneider released his latest EP Spotlight’s On You in April of 2017, and the five-song album hit the #1 spot on the iTunes Country Album Charts. He spent the summer on the road, selling out dates on his own headlining tour, and released “How Does It Sound” in July of 2017, which has already accumulated over 6 million streams on Spotify. In November of 2017, Schneider signed with Interscope Records as the label’s first direct country signing - coinciding with the release of his new single, “No Problem”. He’s was recently on tour as direct support for Chris Lane’s “Take Back Home Tour” and Granger Smith’s “Don’t Tread On Me Tour”. Dylan is currently headlining his own tour, selling out shows across the country. With a lot in the works, Schneider’s focus remains the importance of the fan. “At the end of the day, I’m nothing without my fans. When I write, I’m thinking, ‘how is this song going to sing live, and how will the audience react and identify?’ What I do, most importantly, is for my fans. My job is to connect and show them a good time.” It seems Schneider’s off to a great start in doing just that. UCF Tailgate Concert Series: Sept. 8th (SC State) Dylan Schneider Sept. 21st (FAU) Keith Eaton Sept. 29th (Pittsburgh) Phil Vassar Oct. 6th (SMU) Jill’s Cashbox Nov. 1st (Temple) Rodney Atkins Nov. 10th (Navy) Morgan Wallen Nov. 17th (Cincinnati) Headliner TBA 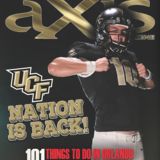