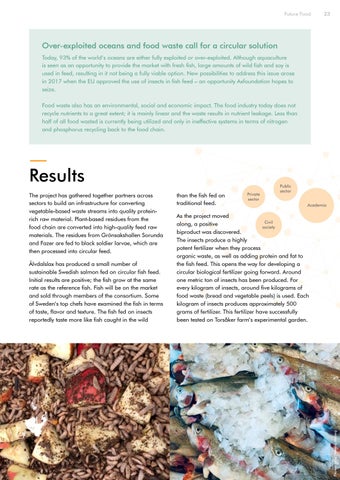 Over-exploited oceans and food waste call for a circular solution Today, 93% of the world’s oceans are either fully exploited or over-exploited. Although aquaculture is seen as an opportunity to provide the market with fresh fish, large amounts of wild fish and soy is used in feed, resulting in it not being a fully viable option. New possibilities to address this issue arose in 2017 when the EU approved the use of insects in fish feed – an opportunity Axfoundation hopes to seize. Food waste also has an environmental, social and economic impact. The food industry today does not recycle nutrients to a great extent; it is mainly linear and the waste results in nutrient leakage. Less than half of all food wasted is currently being utilized and only in ineffective systems in terms of nitrogen and phosphorus recycling back to the food chain.

Älvdalslax has produced a small number of sustainable Swedish salmon fed on circular fish feed. Initial results are positive; the fish grow at the same rate as the reference fish. Fish will be on the market and sold through members of the consortium. Some of Sweden’s top chefs have examined the fish in terms of taste, flavor and texture. The fish fed on insects reportedly taste more like fish caught in the wild

than the fish fed on traditional feed. As the project moved along, a positive biproduct was discovered. The insects produce a highly potent fertilizer when they process organic waste, as well as adding protein and fat to the fish feed. This opens the way for developing a circular biological fertilizer going forward. Around one metric ton of insects has been produced. For every kilogram of insects, around five kilograms of food waste (bread and vegetable peels) is used. Each kilogram of insects produces approximately 500 grams of fertilizer. This fertilizer have successfully been tested on Torsåker farm’s experimental garden.

The project has gathered together partners across sectors to build an infrastructure for converting vegetable-based waste streams into quality proteinrich raw material. Plant-based residues from the food chain are converted into high-quality feed raw materials. The residues from Grönsakshallen Sorunda and Fazer are fed to black soldier larvae, which are then processed into circular feed.