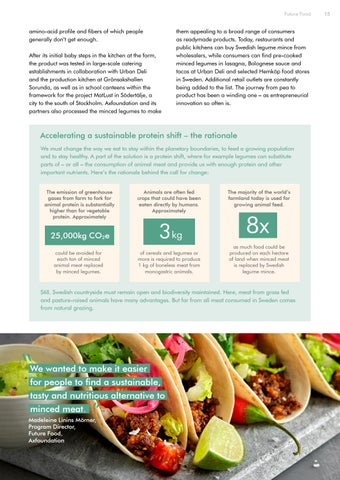 amino-acid profile and fibers of which people generally don’t get enough. After its initial baby steps in the kitchen at the farm, the product was tested in large-scale catering establishments in collaboration with Urban Deli and the production kitchen at Grönsakshallen Sorunda, as well as in school canteens within the framework for the project MatLust in Södertälje, a city to the south of Stockholm. Axfoundation and its partners also processed the minced legumes to make

them appealing to a broad range of consumers as readymade products. Today, restaurants and public kitchens can buy Swedish legume mince from wholesalers, while consumers can find pre-cooked minced legumes in lasagna, Bolognese sauce and tacos at Urban Deli and selected Hemköp food stores in Sweden. Additional retail outlets are constantly being added to the list. The journey from pea to product has been a winding one – as entrepreneurial innovation so often is.

Accelerating a sustainable protein shift – the rationale We must change the way we eat to stay within the planetary boundaries, to feed a growing population and to stay healthy. A part of the solution is a protein shift, where for example legumes can substitute parts of – or all – the consumption of animal meat and provide us with enough protein and other important nutrients. Here’s the rationale behind the call for change: The emission of greenhouse gases from farm to fork for animal protein is substantially higher than for vegetable protein. Approximately

25,000kg CO2e could be avoided for each ton of minced animal meat replaced by minced legumes.

Animals are often fed crops that could have been eaten directly by humans. Approximately

3 kg of cereals and legumes or more is required to produce 1 kg of boneless meat from monogastric animals.

The majority of the world’s farmland today is used for growing animal feed.

8x as much food could be produced on each hectare of land when minced meat is replaced by Swedish legume mince.

Still. Swedish countryside must remain open and biodiversity maintained. Here, meat from grass fed and pasture-raised animals have many advantages. But far from all meat consumed in Sweden comes from natural grazing.

We wanted to make it easier for people to find a sustainable, tasty and nutritious alternative to minced meat.