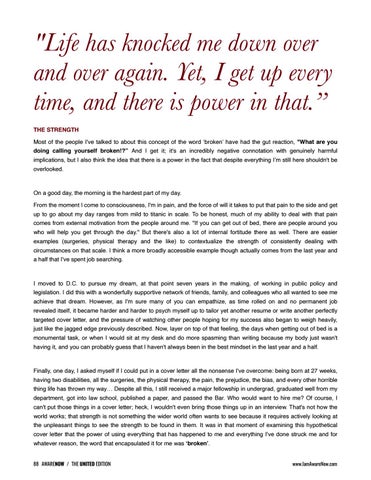 &quot;Life has knocked me down over and over again. Yet, I get up every time, and there is power in that.”

Most of the people I&#39;ve talked to about this concept of the word ‘broken’ have had the gut reaction, &quot;What are you doing calling yourself broken!?” And I get it; it&#39;s an incredibly negative connotation with genuinely harmful implications, but I also think the idea that there is a power in the fact that despite everything I’m still here shouldn&#39;t be overlooked.

On a good day, the morning is the hardest part of my day.

From the moment I come to consciousness, I&#39;m in pain, and the force of will it takes to put that pain to the side and get up to go about my day ranges from mild to titanic in scale. To be honest, much of my ability to deal with that pain comes from external motivation from the people around me. &quot;If you can get out of bed, there are people around you who will help you get through the day.&quot; But there&#39;s also a lot of internal fortitude there as well. There are easier examples (surgeries, physical therapy and the like) to contextualize the strength of consistently dealing with circumstances on that scale. I think a more broadly accessible example though actually comes from the last year and a half that I&#39;ve spent job searching.

I moved to D.C. to pursue my dream, at that point seven years in the making, of working in public policy and legislation. I did this with a wonderfully supportive network of friends, family, and colleagues who all wanted to see me achieve that dream. However, as I&#39;m sure many of you can empathize, as time rolled on and no permanent job revealed itself, it became harder and harder to psych myself up to tailor yet another resume or write another perfectly targeted cover letter, and the pressure of watching other people hoping for my success also began to weigh heavily, just like the jagged edge previously described. Now, layer on top of that feeling, the days when getting out of bed is a monumental task, or when I would sit at my desk and do more spasming than writing because my body just wasn&#39;t having it, and you can probably guess that I haven&#39;t always been in the best mindset in the last year and a half.

Finally, one day, I asked myself if I could put in a cover letter all the nonsense I&#39;ve overcome: being born at 27 weeks, having two disabilities, all the surgeries, the physical therapy, the pain, the prejudice, the bias, and every other horrible thing life has thrown my way… Despite all this, I still received a major fellowship in undergrad, graduated well from my department, got into law school, published a paper, and passed the Bar. Who would want to hire me? Of course, I can&#39;t put those things in a cover letter; heck, I wouldn&#39;t even bring those things up in an interview. That&#39;s not how the world works; that strength is not something the wider world often wants to see because it requires actively looking at the unpleasant things to see the strength to be found in them. It was in that moment of examining this hypothetical cover letter that the power of using everything that has happened to me and everything I&#39;ve done struck me and for whatever reason, the word that encapsulated it for me was ‘broken’. 88 AWARENOW / THE UNITED EDITION