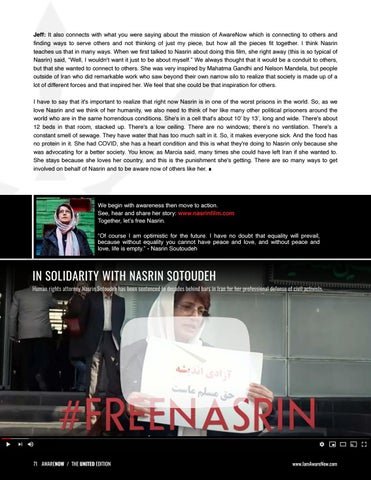 Jeff: It also connects with what you were saying about the mission of AwareNow which is connecting to others and finding ways to serve others and not thinking of just my piece, but how all the pieces fit together. I think Nasrin teaches us that in many ways. When we first talked to Nasrin about doing this film, she right away (this is so typical of Nasrin) said, “Well, I wouldn&#39;t want it just to be about myself.” We always thought that it would be a conduit to others, but that she wanted to connect to others. She was very inspired by Mahatma Gandhi and Nelson Mandela, but people outside of Iran who did remarkable work who saw beyond their own narrow silo to realize that society is made up of a lot of different forces and that inspired her. We feel that she could be that inspiration for others.

I have to say that it&#39;s important to realize that right now Nasrin is in one of the worst prisons in the world. So, as we love Nasrin and we think of her humanity, we also need to think of her like many other political prisoners around the world who are in the same horrendous conditions. She&#39;s in a cell that&#39;s about 10’ by 13’, long and wide. There&#39;s about 12 beds in that room, stacked up. There&#39;s a low ceiling. There are no windows; there’s no ventilation. There&#39;s a constant smell of sewage. They have water that has too much salt in it. So, it makes everyone sick. And the food has no protein in it. She had COVID, she has a heart condition and this is what they&#39;re doing to Nasrin only because she was advocating for a better society. You know, as Marcia said, many times she could have left Iran if she wanted to. She stays because she loves her country, and this is the punishment she&#39;s getting. There are so many ways to get involved on behalf of Nasrin and to be aware now of others like her. ∎

We begin with awareness then move to action.

IN SOLIDARITY WITH NASRIN SOTOUDEH

Human rights attorney Nasrin Sotoudeh has been sentenced to decades behind bars in Iran for her professional defense of civil activists.