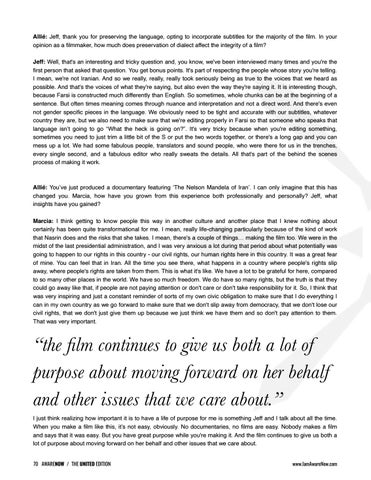 Allié: Jeff, thank you for preserving the language, opting to incorporate subtitles for the majority of the film. In your opinion as a filmmaker, how much does preservation of dialect affect the integrity of a film?

Jeff: Well, that&#39;s an interesting and tricky question and, you know, we&#39;ve been interviewed many times and you&#39;re the first person that asked that question. You get bonus points. It&#39;s part of respecting the people whose story you&#39;re telling. I mean, we&#39;re not Iranian. And so we really, really, really took seriously being as true to the voices that we heard as possible. And that&#39;s the voices of what they&#39;re saying, but also even the way they&#39;re saying it. It is interesting though, because Farsi is constructed much differently than English. So sometimes, whole chunks can be at the beginning of a sentence. But often times meaning comes through nuance and interpretation and not a direct word. And there&#39;s even not gender specific pieces in the language. We obviously need to be tight and accurate with our subtitles, whatever country they are, but we also need to make sure that we&#39;re editing properly in Farsi so that someone who speaks that language isn’t going to go “What the heck is going on?”. It&#39;s very tricky because when you&#39;re editing something, sometimes you need to just trim a little bit of the S or put the two words together, or there&#39;s a long gap and you can mess up a lot. We had some fabulous people, translators and sound people, who were there for us in the trenches, every single second, and a fabulous editor who really sweats the details. All that&#39;s part of the behind the scenes process of making it work.

Allié: You’ve just produced a documentary featuring ‘The Nelson Mandela of Iran’. I can only imagine that this has changed you. Marcia, how have you grown from this experience both professionally and personally? Jeff, what insights have you gained?

Marcia: I think getting to know people this way in another culture and another place that I knew nothing about certainly has been quite transformational for me. I mean, really life-changing particularly because of the kind of work that Nasrin does and the risks that she takes. I mean, there&#39;s a couple of things… making the film too. We were in the midst of the last presidential administration, and I was very anxious a lot during that period about what potentially was going to happen to our rights in this country - our civil rights, our human rights here in this country. It was a great fear of mine. You can feel that in Iran. All the time you see there, what happens in a country where people&#39;s rights slip away, where people&#39;s rights are taken from them. This is what it&#39;s like. We have a lot to be grateful for here, compared to so many other places in the world. We have so much freedom. We do have so many rights, but the truth is that they could go away like that, if people are not paying attention or don&#39;t care or don&#39;t take responsibility for it. So, I think that was very inspiring and just a constant reminder of sorts of my own civic obligation to make sure that I do everything I can in my own country as we go forward to make sure that we don&#39;t slip away from democracy, that we don&#39;t lose our civil rights, that we don&#39;t just give them up because we just think we have them and so don&#39;t pay attention to them. That was very important.

“the film continues to give us both a lot of purpose about moving forward on her behalf and other issues that we care about.”

I just think realizing how important it is to have a life of purpose for me is something Jeff and I talk about all the time. When you make a film like this, it’s not easy, obviously. No documentaries, no films are easy. Nobody makes a film and says that it was easy. But you have great purpose while you&#39;re making it. And the film continues to give us both a lot of purpose about moving forward on her behalf and other issues that we care about. 70 AWARENOW / THE UNITED EDITION