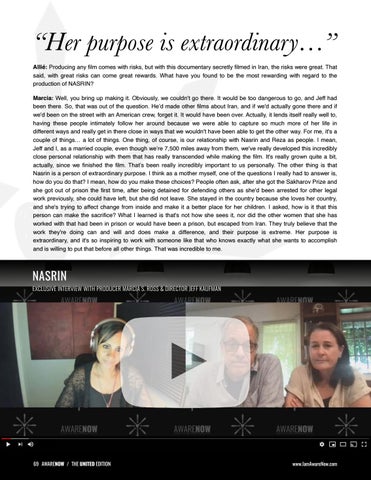 “Her purpose is extraordinary…”

Allié: Producing any film comes with risks, but with this documentary secretly filmed in Iran, the risks were great. That said, with great risks can come great rewards. What have you found to be the most rewarding with regard to the production of NASRIN?

Marcia: Well, you bring up making it. Obviously, we couldn&#39;t go there. It would be too dangerous to go, and Jeff had been there. So, that was out of the question. He’d made other films about Iran, and if we&#39;d actually gone there and if we&#39;d been on the street with an American crew, forget it. It would have been over. Actually, it lends itself really well to, having these people intimately follow her around because we were able to capture so much more of her life in different ways and really get in there close in ways that we wouldn&#39;t have been able to get the other way. For me, it&#39;s a couple of things… a lot of things. One thing, of course, is our relationship with Nasrin and Reza as people. I mean, Jeff and I, as a married couple, even though we’re 7,500 miles away from them, we&#39;ve really developed this incredibly close personal relationship with them that has really transcended while making the film. It&#39;s really grown quite a bit, actually, since we finished the film. That’s been really incredibly important to us personally. The other thing is that Nasrin is a person of extraordinary purpose. I think as a mother myself, one of the questions I really had to answer is, how do you do that? I mean, how do you make these choices? People often ask, after she got the Sakharov Prize and she got out of prison the first time, after being detained for defending others as she&#39;d been arrested for other legal work previously, she could have left, but she did not leave. She stayed in the country because she loves her country, and she&#39;s trying to affect change from inside and make it a better place for her children. I asked, how is it that this person can make the sacrifice? What I learned is that&#39;s not how she sees it, nor did the other women that she has worked with that had been in prison or would have been a prison, but escaped from Iran. They truly believe that the work they&#39;re doing can and will and does make a difference, and their purpose is extreme. Her purpose is extraordinary, and it&#39;s so inspiring to work with someone like that who knows exactly what she wants to accomplish and is willing to put that before all other things. That was incredible to me.