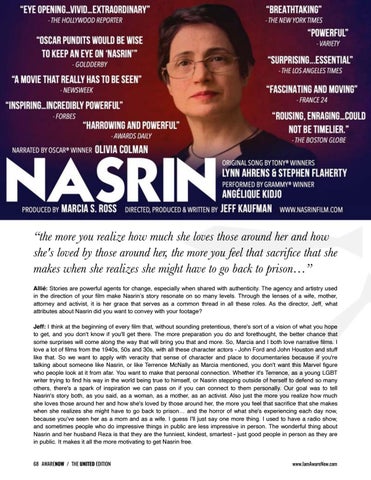 Allié: Stories are powerful agents for change, especially when shared with authenticity. The agency and artistry used in the direction of your film make Nasrin’s story resonate on so many levels. Through the lenses of a wife, mother, attorney and activist, it is her grace that serves as a common thread in all these roles. As the director, Jeff, what attributes about Nasrin did you want to convey with your footage?

Jeff: I think at the beginning of every film that, without sounding pretentious, there&#39;s sort of a vision of what you hope to get, and you don&#39;t know if you&#39;ll get there. The more preparation you do and forethought, the better chance that some surprises will come along the way that will bring you that and more. So, Marcia and I both love narrative films. I love a lot of films from the 1940s, 50s and 30s, with all these character actors - John Ford and John Houston and stuff like that. So we want to apply with veracity that sense of character and place to documentaries because if you&#39;re talking about someone like Nasrin, or like Terrence McNally as Marcia mentioned, you don&#39;t want this Marvel figure who people look at it from afar. You want to make that personal connection. Whether it&#39;s Terrence, as a young LGBT writer trying to find his way in the world being true to himself, or Nasrin stepping outside of herself to defend so many others, there&#39;s a spark of inspiration we can pass on if you can connect to them personally. Our goal was to tell Nasrin&#39;s story both, as you said, as a woman, as a mother, as an activist. Also just the more you realize how much she loves those around her and how she&#39;s loved by those around her, the more you feel that sacrifice that she makes when she realizes she might have to go back to prison… and the horror of what she&#39;s experiencing each day now, because you&#39;ve seen her as a mom and as a wife. I guess I&#39;ll just say one more thing. I used to have a radio show, and sometimes people who do impressive things in public are less impressive in person. The wonderful thing about Nasrin and her husband Reza is that they are the funniest, kindest, smartest - just good people in person as they are in public. It makes it all the more motivating to get Nasrin free.