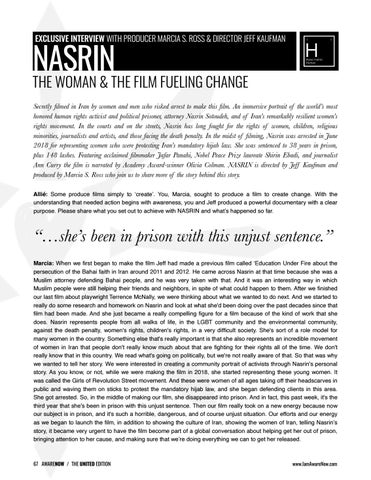 THE WOMAN &amp; THE FILM FUELING CHANGE Secretly filmed in Iran by women and men who risked arrest to make this film. An immersive portrait of the world’s most honored human rights activist and political prisoner, attorney Nasrin Sotoudeh, and of Iran’s remarkably resilient women’s rights movement. In the courts and on the streets, Nasrin has long fought for the rights of women, children, religious minorities, journalists and artists, and those facing the death penalty. In the midst of filming, Nasrin was arrested in June 2018 for representing women who were protesting Iran’s mandatory hijab law. She was sentenced to 38 years in prison, plus 148 lashes. Featuring acclaimed filmmaker Jafar Panahi, Nobel Peace Prize laureate Shirin Ebadi, and journalist Ann Curry the film is narrated by Academy Award-winner Olivia Colman. NASRIN is directed by Jeff Kaufman and produced by Marcia S. Ross who join us to share more of the story behind this story.

Allié: Some produce films simply to ‘create’. You, Marcia, sought to produce a film to create change. With the understanding that needed action begins with awareness, you and Jeff produced a powerful documentary with a clear purpose. Please share what you set out to achieve with NASRIN and what’s happened so far.

“…she’s been in prison with this unjust sentence.”

Marcia: When we first began to make the film Jeff had made a previous film called ‘Education Under Fire about the persecution of the Bahai faith in Iran around 2011 and 2012. He came across Nasrin at that time because she was a Muslim attorney defending Bahai people, and he was very taken with that. And it was an interesting way in which Muslim people were still helping their friends and neighbors, in spite of what could happen to them. After we finished our last film about playwright Terrence McNally, we were thinking about what we wanted to do next. And we started to really do some research and homework on Nasrin and look at what she&#39;d been doing over the past decades since that film had been made. And she just became a really compelling figure for a film because of the kind of work that she does. Nasrin represents people from all walks of life, in the LGBT community and the environmental community, against the death penalty, women&#39;s rights, children&#39;s rights, in a very difficult society. She&#39;s sort of a role model for many women in the country. Something else that&#39;s really important is that she also represents an incredible movement of women in Iran that people don&#39;t really know much about that are fighting for their rights all of the time. We don&#39;t really know that in this country. We read what&#39;s going on politically, but we&#39;re not really aware of that. So that was why we wanted to tell her story. We were interested in creating a community portrait of activists through Nasrin&#39;s personal story. As you know, or not, while we were making the film in 2018, she started representing these young women. It was called the Girls of Revolution Street movement. And these were women of all ages taking off their headscarves in public and waving them on sticks to protest the mandatory hijab law, and she began defending clients in this area. She got arrested. So, in the middle of making our film, she disappeared into prison. And in fact, this past week, it&#39;s the third year that she&#39;s been in prison with this unjust sentence. Then our film really took on a new energy because now our subject is in prison, and it&#39;s such a horrible, dangerous, and of course unjust situation. Our efforts and our energy as we began to launch the film, in addition to showing the culture of Iran, showing the women of Iran, telling Nasrin’s story, it became very urgent to have the film become part of a global conversation about helping get her out of prison, bringing attention to her cause, and making sure that we’re doing everything we can to get her released.