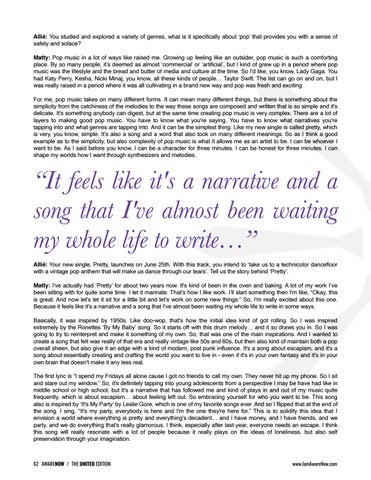 Allié: You studied and explored a variety of genres, what is it specifically about ‘pop’ that provides you with a sense of safety and solace?

Matty: Pop music in a lot of ways like raised me. Growing up feeling like an outsider, pop music is such a comforting place. By so many people, it’s deemed as almost ‘commercial’ or ‘artificial’, but I kind of grew up in a period where pop music was the lifestyle and the bread and butter of media and culture at the time. So I&#39;d like, you know, Lady Gaga. You had Katy Perry, Kesha, Nicki Minaj, you know, all these kinds of people… Taylor Swift. The list can go on and on, but I was really raised in a period where it was all cultivating in a brand new way and pop was fresh and exciting.

For me, pop music takes on many different forms. It can mean many different things, but there is something about the simplicity from the catchiness of the melodies to the way these songs are composed and written that is so simple and it&#39;s delicate. It&#39;s something anybody can digest, but at the same time creating pop music is very complex. There are a lot of layers to making good pop music. You have to know what you&#39;re saying. You have to know what narratives you&#39;re tapping into and what genres are tapping into. And it can be the simplest thing. Like my new single is called pretty, which is very, you know, simple. It’s also a song and a word that also took on many different meanings. So as I think a good example as to the simplicity, but also complexity of pop music is what it allows me as an artist to be. I can be whoever I want to be. As I said before you know, I can be a character for three minutes. I can be honest for three minutes. I can shape my worlds how I want through synthesizers and melodies.

“It feels like it&#39;s a narrative and a song that I&#39;ve almost been waiting my whole life to write…”

Allié: Your new single, Pretty, launches on June 25th. With this track, you intend to ‘take us to a technicolor dancefloor with a vintage pop anthem that will make us dance through our tears’. Tell us the story behind ‘Pretty’.

Matty: I&#39;ve actually had ‘Pretty’ for about two years now. It&#39;s kind of been in the oven and baking. A lot of my work I’ve been sitting with for quite some time. I let it marinate. That’s how I like work. I’ll start something then I&#39;m like, “Okay, this is great. And now let&#39;s let it sit for a little bit and let’s work on some new things.” So, I&#39;m really excited about this one. Because it feels like it&#39;s a narrative and a song that I&#39;ve almost been waiting my whole life to write in some ways.

Basically, it was inspired by 1950s. Like doo-wop, that&#39;s how the initial idea kind of got rolling. So I was inspired extremely by the Ronettes ‘By My Baby’ song. So it starts off with this drum melody… and it so draws you in. So I was going to try to reinterpret and make it something of my own. So, that was one of the main inspirations. And I wanted to create a song that felt was really of that era and really vintage like 50s and 60s, but then also kind of maintain both a pop overall sheen, but also give it an edge with a kind of modern, post punk influence. It&#39;s a song about escapism, and it&#39;s a song about essentially creating and crafting the world you want to live in - even if it&#39;s in your own fantasy and it&#39;s in your own brain that doesn&#39;t make it any less real.

The first lyric is “I spend my Fridays all alone cause I got no friends to call my own. They never hit up my phone. So I sit and stare out my window.” So, it&#39;s definitely tapping into young adolescents from a perspective I may be have had like in middle school or high school, but it&#39;s a narrative that has followed me and kind of plays in and out of my music quite frequently, which is about escapism… about feeling left out. So embracing yourself for who you want to be. This song also is inspired by ‘It&#39;s My Party’ by Leslie Gore, which is one of my favorite songs ever. And so I flipped that at the end of the song. I sing, “It&#39;s my party, everybody is here and I&#39;m the one they&#39;re here for.” This is to solidify this idea that I envision a world where everything is pretty and everything&#39;s decadent… and I have money, and I have friends, and we party, and we do everything that&#39;s really glamorous. I think, especially after last year, everyone needs an escape. I think this song will really resonate with a lot of people because it really plays on the ideas of loneliness, but also self preservation through your imagination.