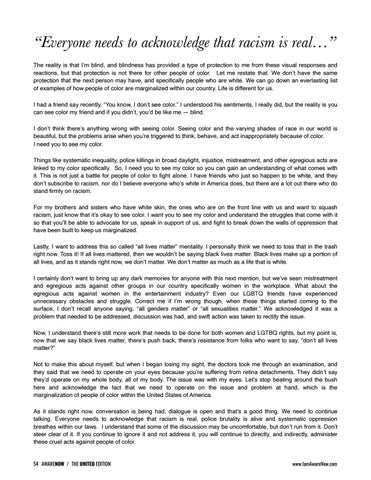 “Everyone needs to acknowledge that racism is real…”

The reality is that I’m blind, and blindness has provided a type of protection to me from these visual responses and reactions, but that protection is not there for other people of color. Let me restate that. We don’t have the same protection that the next person may have, and specifically people who are white. We can go down an everlasting list of examples of how people of color are marginalized within our country. Life is different for us.

I had a friend say recently, “You know, I don’t see color.” I understood his sentiments, I really did, but the reality is you can see color my friend and if you didn’t, you’d be like me — blind.

I don’t think there’s anything wrong with seeing color. Seeing color and the varying shades of race in our world is beautiful, but the problems arise when you’re triggered to think, behave, and act inappropriately because of color.

I need you to see my color.

Things like systematic inequality, police killings in broad daylight, injustice, mistreatment, and other egregious acts are linked to my color specifically. So, I need you to see my color so you can gain an understanding of what comes with it. This is not just a battle for people of color to fight alone. I have friends who just so happen to be white, and they don’t subscribe to racism, nor do I believe everyone who’s white in America does, but there are a lot out there who do stand firmly on racism.

For my brothers and sisters who have white skin, the ones who are on the front line with us and want to squash racism, just know that it’s okay to see color. I want you to see my color and understand the struggles that come with it so that you’ll be able to advocate for us, speak in support of us, and fight to break down the walls of oppression that have been built to keep us marginalized.

I certainly don’t want to bring up any dark memories for anyone with this next mention, but we’ve seen mistreatment and egregious acts against other groups in our country specifically women in the workplace. What about the egregious acts against women in the entertainment industry? Even our LGBTQ friends have experienced unnecessary obstacles and struggle. Correct me if I’m wrong though, when these things started coming to the surface, I don’t recall anyone saying, “all genders matter” or “all sexualities matter.” We acknowledged it was a problem that needed to be addressed, discussion was had, and swift action was taken to rectify the issue.

Now, I understand there’s still more work that needs to be done for both women and LGTBQ rights, but my point is, now that we say black lives matter, there’s push back, there’s resistance from folks who want to say, “don’t all lives matter?”

Not to make this about myself, but when I began losing my sight, the doctors took me through an examination, and they said that we need to operate on your eyes because you’re suffering from retina detachments. They didn’t say they’d operate on my whole body, all of my body. The issue was with my eyes. Let’s stop beating around the bush here and acknowledge the fact that we need to operate on the issue and problem at hand, which is the marginalization of people of color within the United States of America.

As it stands right now, conversation is being had, dialogue is open and that’s a good thing. We need to continue talking. Everyone needs to acknowledge that racism is real, police brutality is alive and systematic oppression breathes within our laws. I understand that some of the discussion may be uncomfortable, but don’t run from it. Don’t steer clear of it. If you continue to ignore it and not address it, you will continue to directly, and indirectly, administer these cruel acts against people of color.