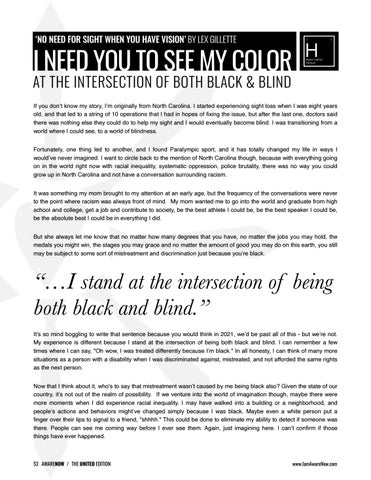 I NEED YOU TO SEE MY COLOR

AT THE INTERSECTION OF BOTH BLACK &amp; BLIND

If you don’t know my story, I’m originally from North Carolina. I started experiencing sight loss when I was eight years old, and that led to a string of 10 operations that I had in hopes of fixing the issue, but after the last one, doctors said there was nothing else they could do to help my sight and I would eventually become blind. I was transitioning from a world where I could see, to a world of blindness.

Fortunately, one thing led to another, and I found Paralympic sport, and it has totally changed my life in ways I would’ve never imagined. I want to circle back to the mention of North Carolina though, because with everything going on in the world right now with racial inequality, systematic oppression, police brutality, there was no way you could grow up in North Carolina and not have a conversation surrounding racism.

It was something my mom brought to my attention at an early age, but the frequency of the conversations were never to the point where racism was always front of mind. My mom wanted me to go into the world and graduate from high school and college, get a job and contribute to society, be the best athlete I could be, be the best speaker I could be, be the absolute best I could be in everything I did.

But she always let me know that no matter how many degrees that you have, no matter the jobs you may hold, the medals you might win, the stages you may grace and no matter the amount of good you may do on this earth, you still may be subject to some sort of mistreatment and discrimination just because you’re black.

“…I stand at the intersection of being both black and blind.”

It’s so mind boggling to write that sentence because you would think in 2021, we’d be past all of this - but we’re not. My experience is different because I stand at the intersection of being both black and blind. I can remember a few times where I can say, &quot;Oh wow, I was treated differently because I’m black.&quot; In all honesty, I can think of many more situations as a person with a disability when I was discriminated against, mistreated, and not afforded the same rights as the next person.

Now that I think about it, who&#39;s to say that mistreatment wasn’t caused by me being black also? Given the state of our country, it’s not out of the realm of possibility. If we venture into the world of imagination though, maybe there were more moments when I did experience racial inequality. I may have walked into a building or a neighborhood, and people’s actions and behaviors might’ve changed simply because I was black. Maybe even a white person put a finger over their lips to signal to a friend, &quot;shhhh.&quot; This could be done to eliminate my ability to detect if someone was there. People can see me coming way before I ever see them. Again, just imagining here. I can’t confirm if those things have ever happened.