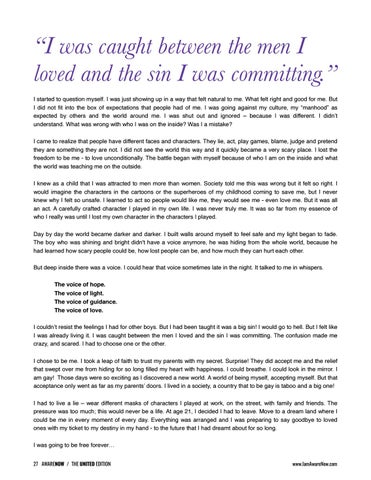 “I was caught between the men I loved and the sin I was committing.”

I started to question myself. I was just showing up in a way that felt natural to me. What felt right and good for me. But I did not fit into the box of expectations that people had of me. I was going against my culture, my “manhood” as expected by others and the world around me. I was shut out and ignored – because I was different. I didn’t understand. What was wrong with who I was on the inside? Was I a mistake?

I came to realize that people have different faces and characters. They lie, act, play games, blame, judge and pretend they are something they are not. I did not see the world this way and it quickly became a very scary place. I lost the freedom to be me - to love unconditionally. The battle began with myself because of who I am on the inside and what the world was teaching me on the outside.

I knew as a child that I was attracted to men more than women. Society told me this was wrong but it felt so right. I would imagine the characters in the cartoons or the superheroes of my childhood coming to save me, but I never knew why I felt so unsafe. I learned to act so people would like me, they would see me - even love me. But it was all an act. A carefully crafted character I played in my own life. I was never truly me. It was so far from my essence of who I really was until I lost my own character in the characters I played.

Day by day the world became darker and darker. I built walls around myself to feel safe and my light began to fade. The boy who was shining and bright didn&#39;t have a voice anymore, he was hiding from the whole world, because he had learned how scary people could be, how lost people can be, and how much they can hurt each other.

But deep inside there was a voice. I could hear that voice sometimes late in the night. It talked to me in whispers.

The voice of hope.

The voice of light.

The voice of guidance.

The voice of love.

I couldn’t resist the feelings I had for other boys. But I had been taught it was a big sin! I would go to hell. But I felt like I was already living it. I was caught between the men I loved and the sin I was committing. The confusion made me crazy, and scared. I had to choose one or the other.

I chose to be me. I took a leap of faith to trust my parents with my secret. Surprise! They did accept me and the relief that swept over me from hiding for so long filled my heart with happiness. I could breathe. I could look in the mirror. I am gay! Those days were so exciting as I discovered a new world. A world of being myself, accepting myself. But that acceptance only went as far as my parents’ doors. I lived in a society, a country that to be gay is taboo and a big one!

I had to live a lie – wear different masks of characters I played at work, on the street, with family and friends. The pressure was too much; this would never be a life. At age 21, I decided I had to leave. Move to a dream land where I could be me in every moment of every day. Everything was arranged and I was preparing to say goodbye to loved ones with my ticket to my destiny in my hand - to the future that I had dreamt about for so long.