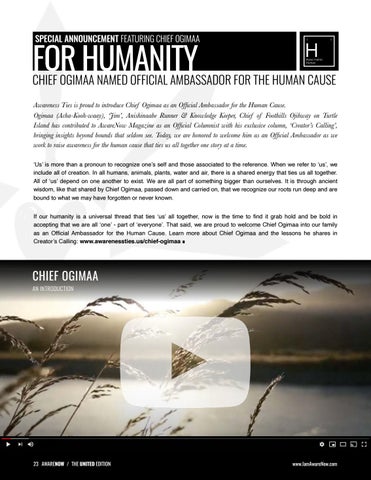 Ogimaa (Acha-Kooh-waay), ‘Jim’, Anishinaabe Runner &amp; Knowledge Keeper, Chief of Foothills Ojibway on Turtle Island has contributed to AwareNow Magazine as an Official Columnist with his exclusive column, ‘Creator’s Calling’, bringing insights beyond bounds that seldom see. Today, we are honored to welcome him as an Official Ambassador as we work to raise awareness for the human cause that ties us all together one story at a time.

‘Us’ is more than a pronoun to recognize one’s self and those associated to the reference. When we refer to ‘us’, we include all of creation. In all humans, animals, plants, water and air, there is a shared energy that ties us all together. All of ‘us’ depend on one another to exist. We are all part of something bigger than ourselves. It is through ancient wisdom, like that shared by Chief Ogimaa, passed down and carried on, that we recognize our roots run deep and are bound to what we may have forgotten or never known.

If our humanity is a universal thread that ties ‘us’ all together, now is the time to find it grab hold and be bold in accepting that we are all ‘one’ - part of ‘everyone’. That said, we are proud to welcome Chief Ogimaa into our family as an Official Ambassador for the Human Cause. Learn more about Chief Ogimaa and the lessons he shares in Creator’s Calling: www.awarenessties.us/chief-ogimaa ∎