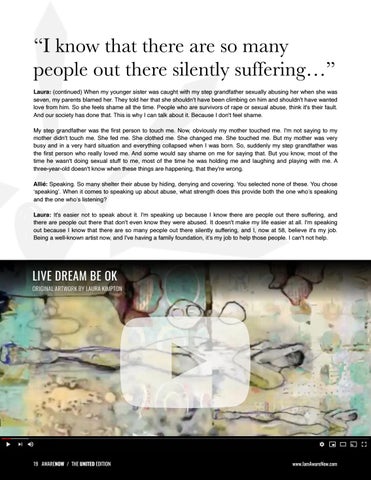 Laura: (continued) When my younger sister was caught with my step grandfather sexually abusing her when she was seven, my parents blamed her. They told her that she shouldn&#39;t have been climbing on him and shouldn&#39;t have wanted love from him. So she feels shame all the time. People who are survivors of rape or sexual abuse, think it&#39;s their fault. And our society has done that. This is why I can talk about it. Because I don&#39;t feel shame.

My step grandfather was the first person to touch me. Now, obviously my mother touched me. I&#39;m not saying to my mother didn&#39;t touch me. She fed me. She clothed me. She changed me. She touched me. But my mother was very busy and in a very hard situation and everything collapsed when I was born. So, suddenly my step grandfather was the first person who really loved me. And some would say shame on me for saying that. But you know, most of the time he wasn&#39;t doing sexual stuff to me, most of the time he was holding me and laughing and playing with me. A three-year-old doesn&#39;t know when these things are happening, that they&#39;re wrong.

Allié: Speaking. So many shelter their abuse by hiding, denying and covering. You selected none of these. You chose ‘speaking’. When it comes to speaking up about abuse, what strength does this provide both the one who’s speaking and the one who’s listening?